Thank yous to the RtFE thinktank:
Charles Olson and Chris Valade for their Erebus photos and insights.
Randall Osczevski for the Erebus wreck schematic.
Kristina Gehrmann for the Franklin cabin panorama.
Kim Jones for the only photo inside the Erebus seaman’s chest.
Regina Koellner for advice and much encouragement.

I made this video when it sunk in that I would never be able to dive on Erebus.  Michael Palin talked about it in his book and it stuck in my head.  It took months of figuring out where on the ship unlabeled photos came from – assisted with critical help from Charles Olson and Chris Valade at RtFE.  I was trying to picture what it would be like to swim the ship from bow to stern, looking inside the ship where possible. 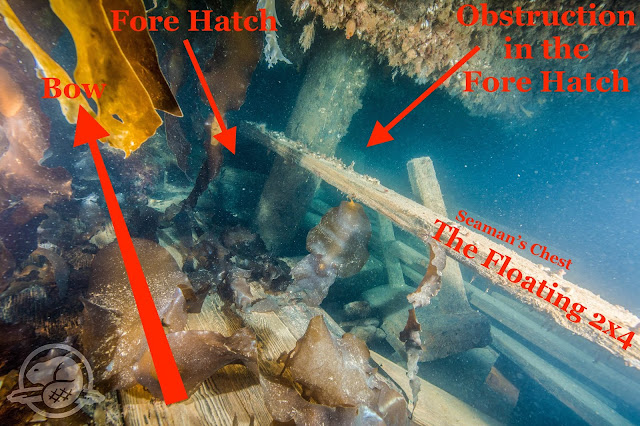 There are two errors in this video, one intentional and one a guess that turned out wrong.  What I initially hoped was the main mast in the video is another angle on the ‘mess deck fore hatch’ area; the "mast" is in fact a pump tube (photo above).  When I realized I’d have to cut that transition, I decided to publish what I had so far – any visualization is better than no visualization.  The other error is the nail seen right before the Starboard Officer Cabins shots; that is in fact the port forecastle looking aft; the lefthand side shows the main hatch.  Someday I'd like to re-do this with corrections and more new footage, but as of this writing (April 2020), not much more has been released.

The previous video, F2, was a much shorter version of this video (with Song to the Siren sung by Elizabeth Fraser instead of this Badalamenti instrumental, Dark Spanish Symphony, from the great Donner Party documentary).  The very positive feedback I got about F2 from Leila Garcia and Regina Koellner made me decide not to share it, but to go back and expand it, with more stops along the ship. This F3 is the result.