“I am Lieutenant Pim of the Resolute.”

The Franklin searcher who found Robert McClure and HMS Investigator, shouting this line across the ice, is himself lost in a London cemetery. McClure happens to be buried in the same cemetery, but this time he’s not the one missing.

In 2012, Wolfgang and Mechtild Opel were the first to write that they couldn’t locate Lieutenant Pim in London’s titanic Kensal Green Cemetery. This is a few years after Russell Potter visited, in 2009, and found McClure among others. Since then, Regina Koellner came to the same area (2016 & 2019) and reported finding the Pim section overgrown with ivy and brambles.

Having read these “missing Pim” threads, Alison Freebairn and I agreed that we would go looking for him. We think we found him. But it is a grave with no markings.

FOR ANYONE GOING TO LOOK:

As Mechtild Opel helpfully wrote at RtFE, Pim is in area #40. This is along the southern wall, almost certainly the most difficult place to find someone in Kensal Green Cemetery.

These graves are low-lying, very close to a canal, tightly packed, have occasional piles of loose bricks over them, and a dense network of thorny plant life covering everything. Some southern wall sections even have burials from a few years ago ploughed in rows right on top of them.

Alison had paid the Beetlejuice-sounding website The Deceased Online to give her the grave number for Pim. (This is before we realized Wolfgang and Mechtild at Trimaris had offered it for free to anyone helping in the search.) We were then given the #40 map by the helpful cemetery office, with surnames written over rectangles and lines for roads and walls.

The first issue with finding Pim is: one can’t begin to orientate with surnames if none of the headstones are visible. And almost none are visible along that entire southern wall. 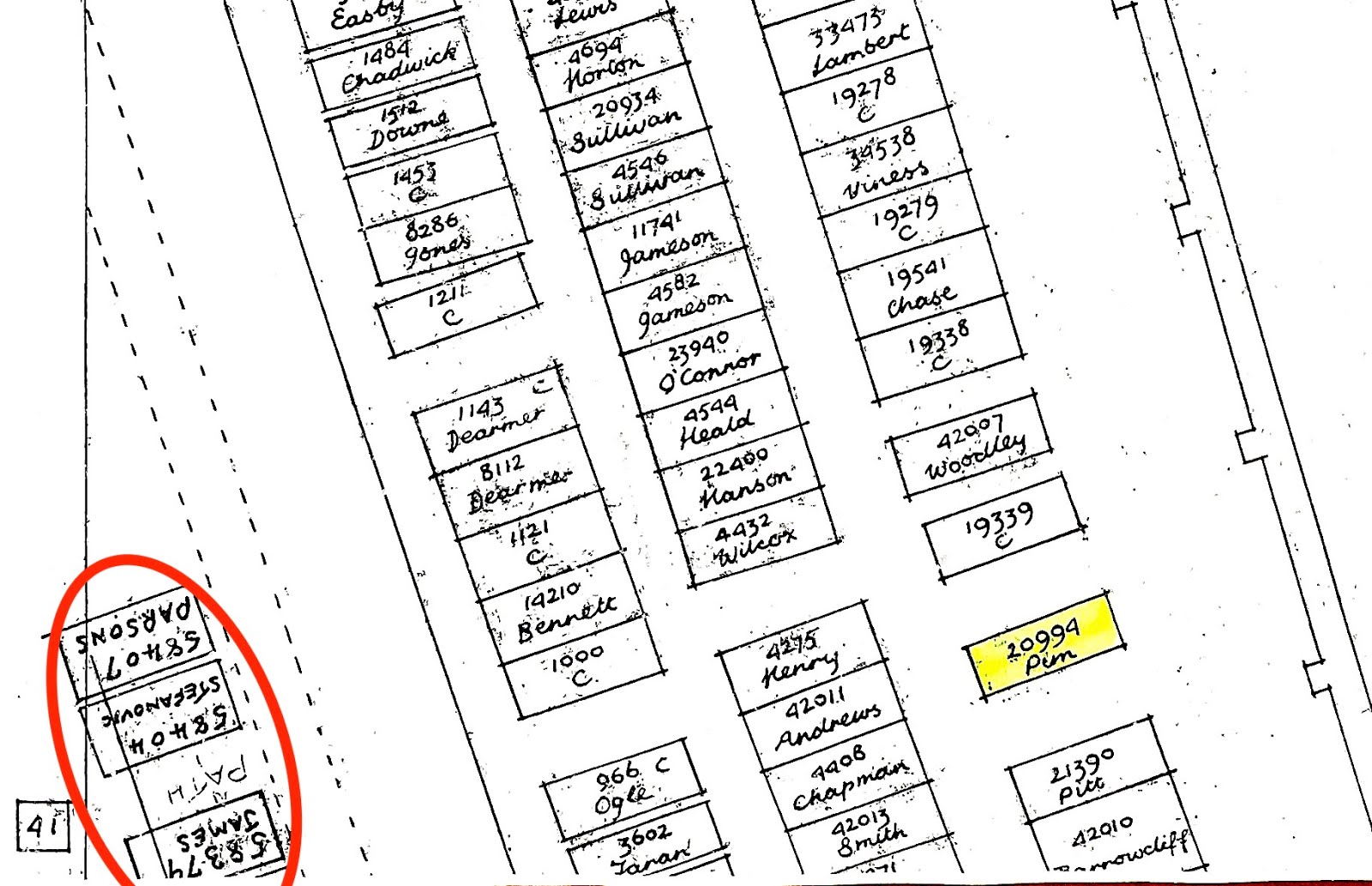 However – by luck – area #40 includes three graves across the cemetery road. Merely by being on the other side of that road, they are in an area kept cleared and cared for. The three surnames are: James, Stefanovic, and Parsons.

Find them, then wheel around to face back across the road, and one should be looking roughly at where Pim’s grave was located. 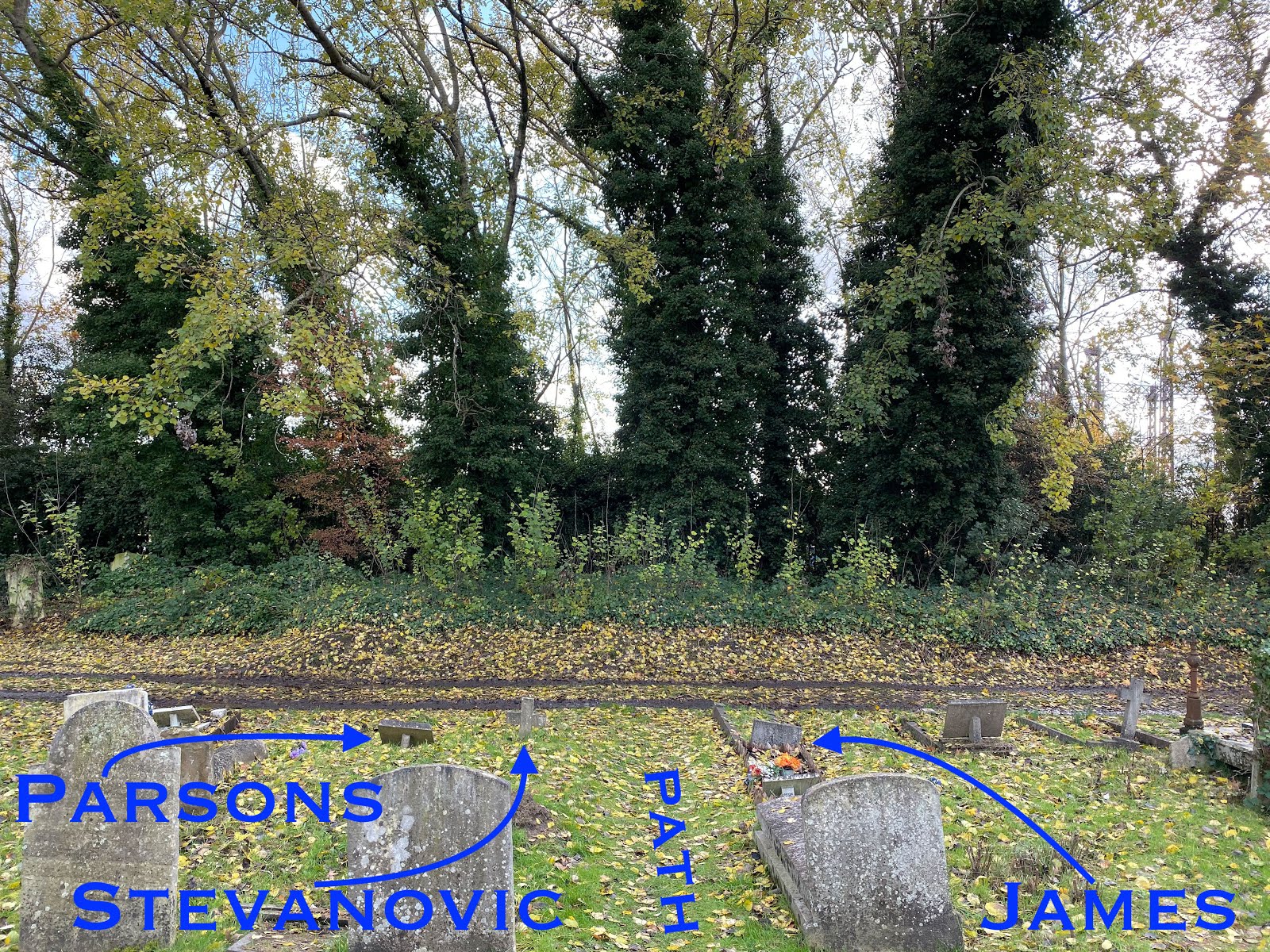 Walking back and forth along the road, I eventually saw Cyrillic letters on a cross, and could make out that it was Stefanovic. Next to this was a James, and a Parsons. In between them was a faint path to the road, just as the map indicates.  Ahead lay the overgrown tangle of the southern wall. 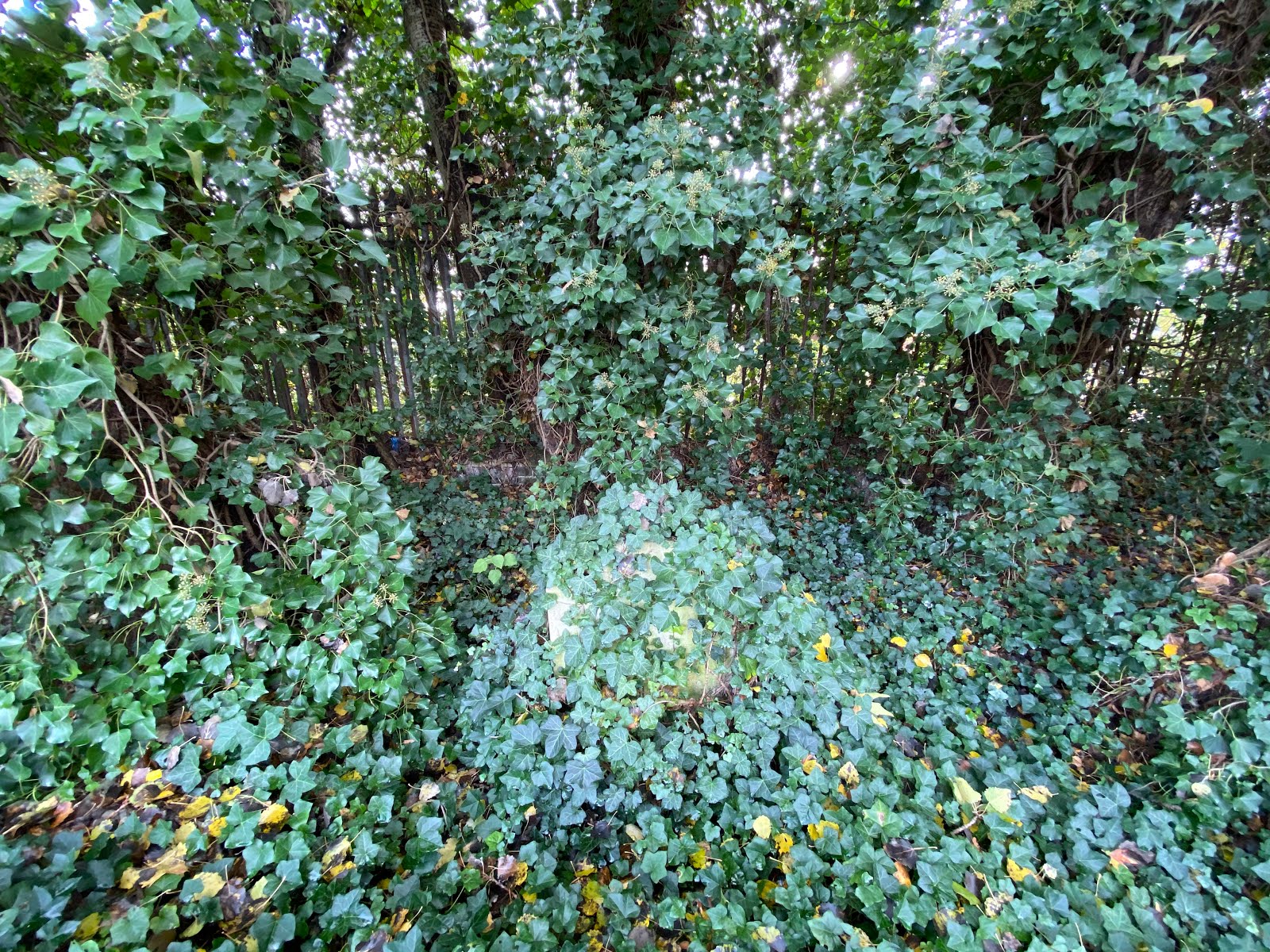 I called to Alison to come over. Across the road, back by the southern wall, I could see one still-standing headstone. It was buried under ivy but the shape was unmistakable. 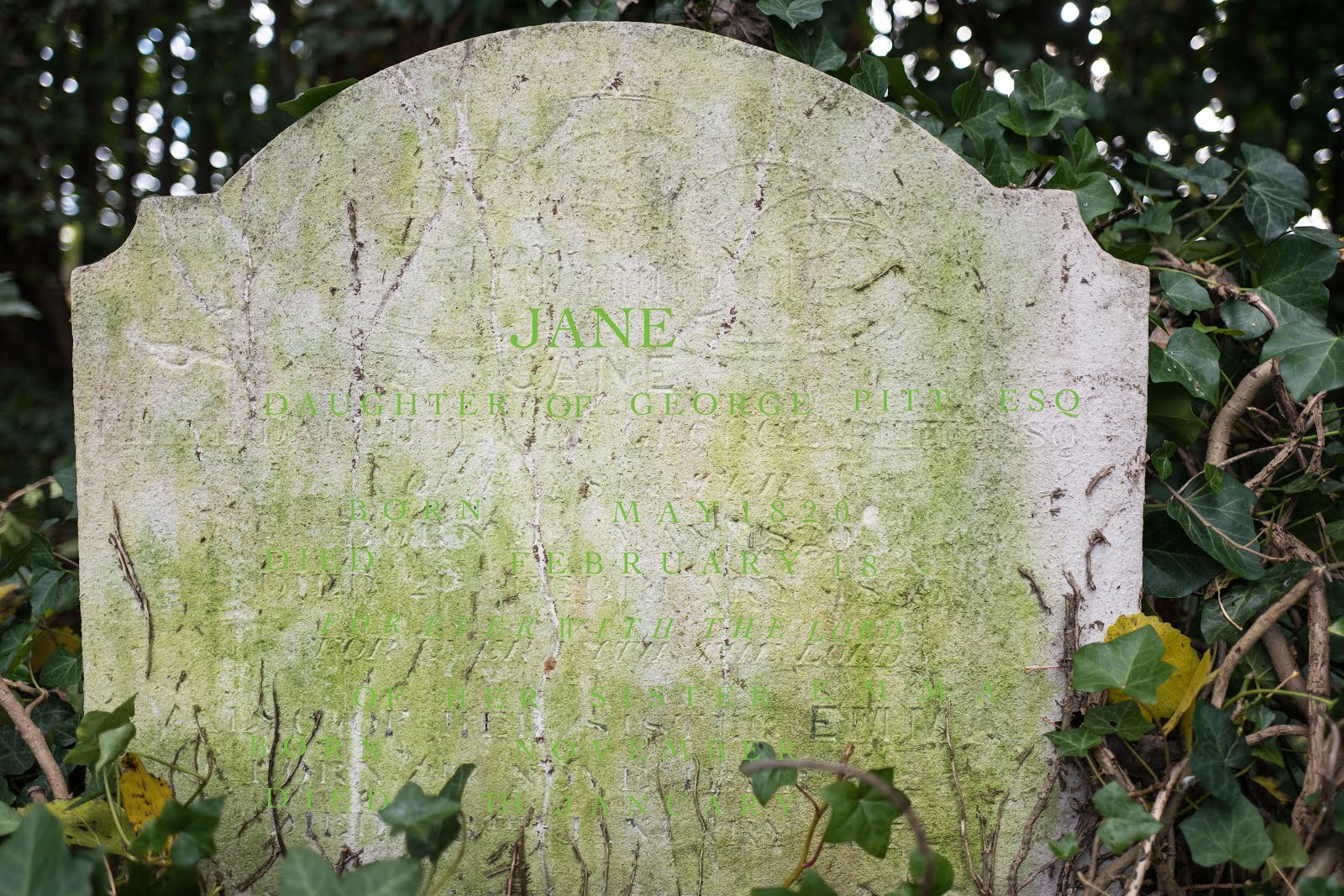 By the time I was pulling back the ivy, Alison was there. But this headstone revealed itself to be extremely worn. There are traces of lettering all over it, but we could not make out a single word except one, the most prominent: “JANE”. There was no Jane on the #40 map.

I had noticed no other graves in the immediate area. However, while I struggled to see a word resembling Pim on the “JANE” headstone, Alison approached a tree to our left, picked up the branches, and found another entire tomb in the earth. 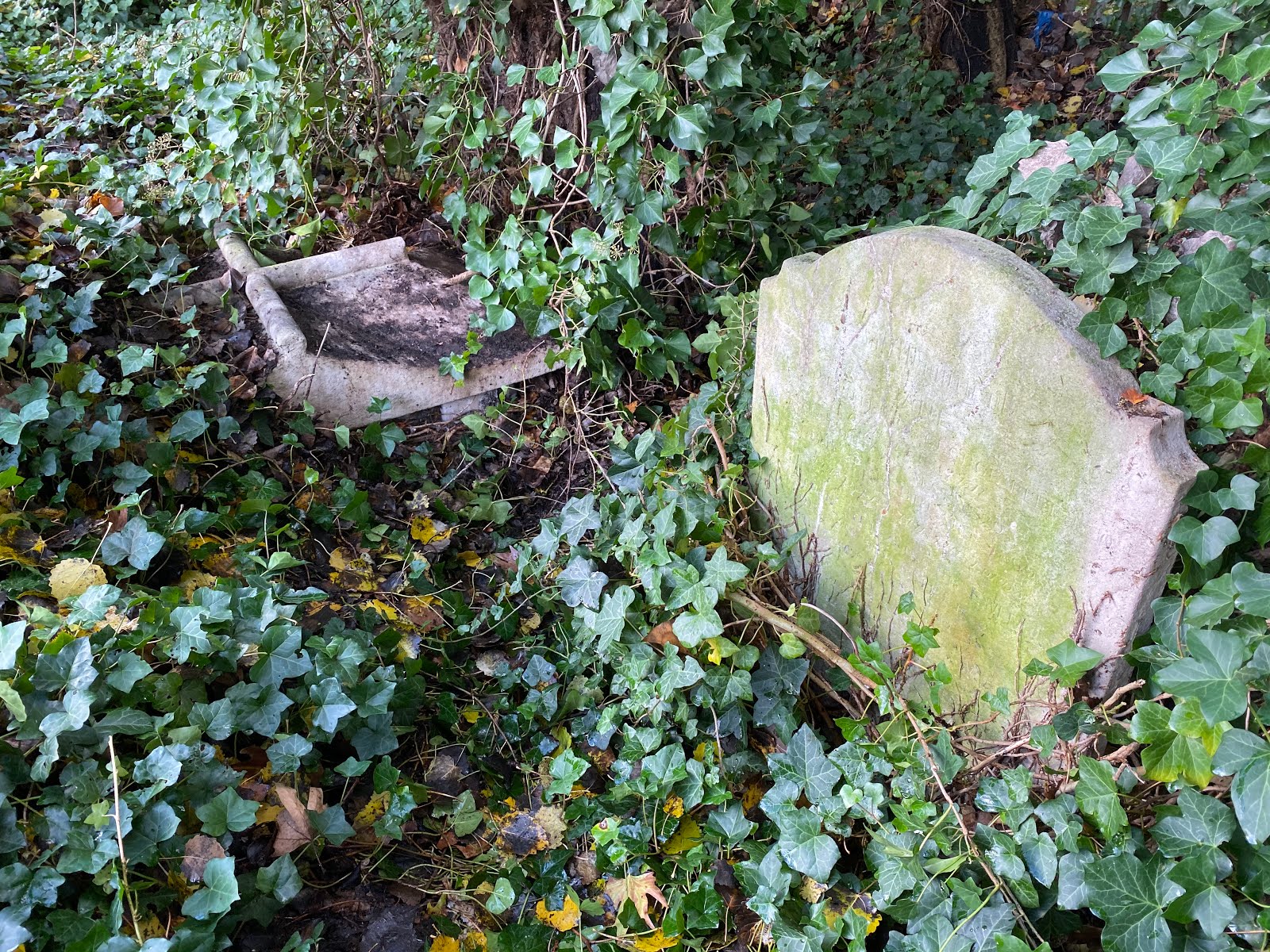 At this 2nd grave, there was no headstone. Just a flat-lying tomb cover with sloping sides and a cross shape, two-thirds buried under the earth of a small hill. Alison began cleaning it off, but no words on it were evident.

At this point I looked back at the #40 map. There were three surnames of burials around Pim: Woodley, Pitt, and Barrowcliff.

If we could find one of those names on the “Jane” headstone, it would give us a bearing. It might even tell us that the unmarked grave was actually Pim, if the “Jane” stone happened to be Mr./Mrs. Pitt’s. Pim was just one grave to the left of Pitt on the map.

Alison walked around behind me to scan the Jane headstone again. This time, she immediately pointed and said, “There it is: the name Pitt. And so the unmarked tomb on the left must be Pim’s.” 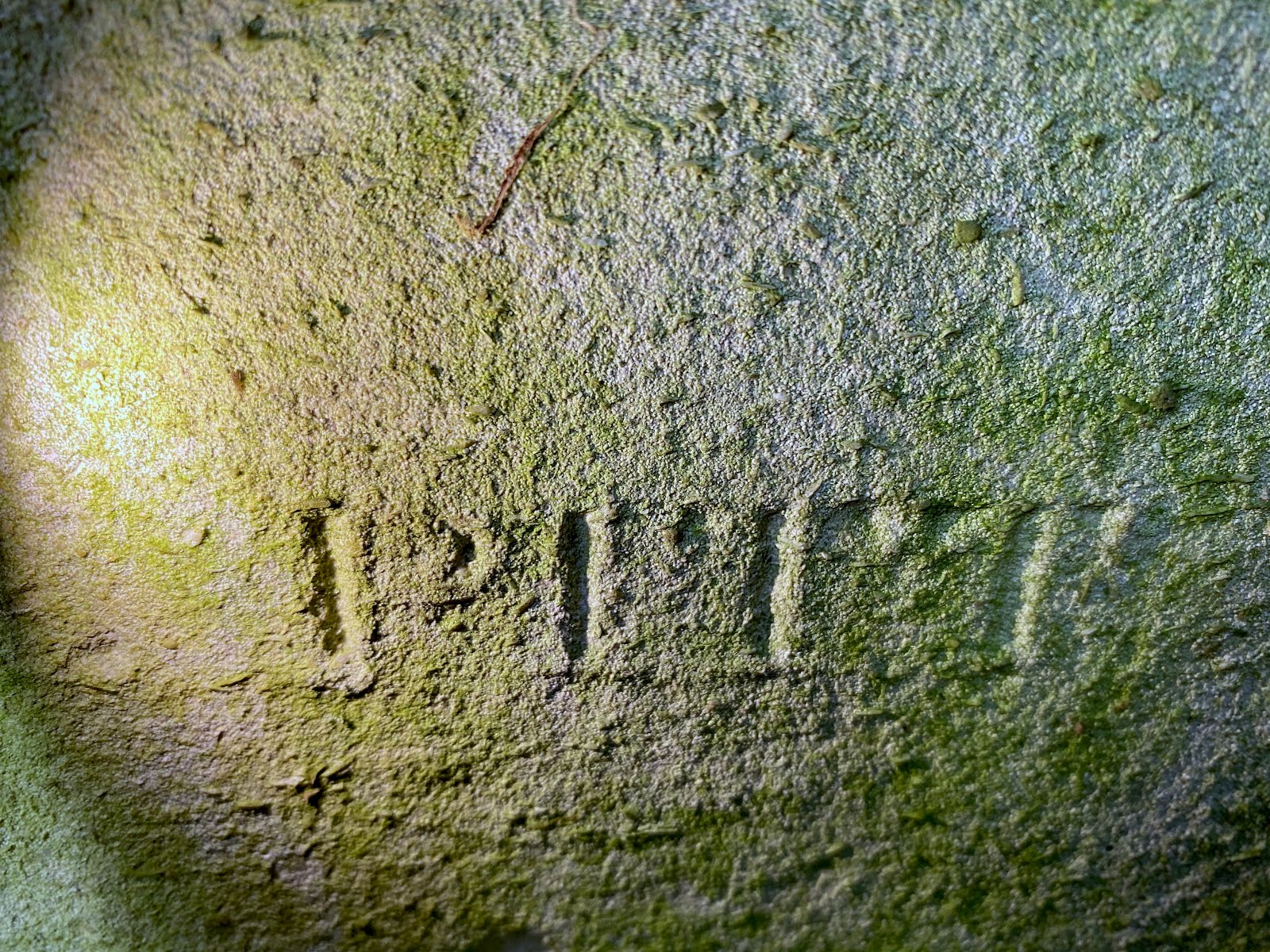 I was still straining to see it, until I stood in her place, catching the shadows at an oblique angle. Jane, Daughter of George Pitt. 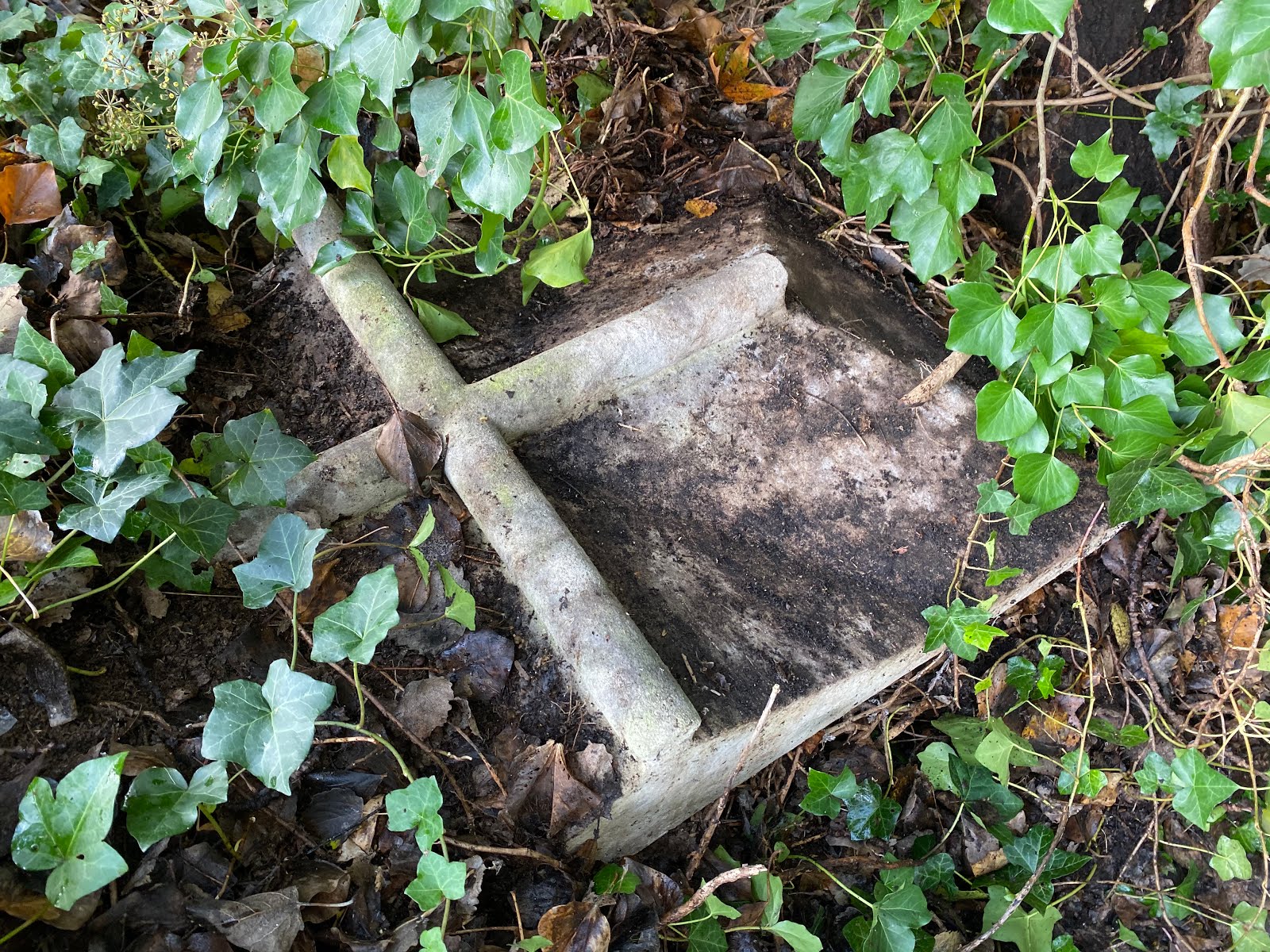 We then made a real effort to clear off the unmarked tomb Alison had found. We came back a 2nd day with gloves to save our hands. But we never found a single word on it.

The tomb cover itself appears to have been elevated maybe 6 inches from the original ground level by an additional layer of stone. Lengthwise it’s at least two-thirds buried under 2+ feet of earth, like a sleeper who has pulled up the covers. There was even a brick buried in the earth above it, very disturbingly.

While a few people might slowly pull this all away with gardening tools over the course of a day or two, what’s likely needed is a shovel and a work crew. We made countless scans of the stone for writing, trying to use shadows and angles again, without seeing anything.

I’m including shots of both graves, and the most legible shot of the name “Pitt” that I could get. Anyone attempting to investigate this is warned that the slopes are steep, wet, thorny, and with unseen holes to fall into, hidden beneath the ivy. Searchers take care.

Also be aware: it is extremely hard to walk away from, knowing that one more brush of leaves and earth away could reveal the first letters – a name, a year, a spouse. Anything at all to link it conclusively to Lieutenant Pim of the Resolute. 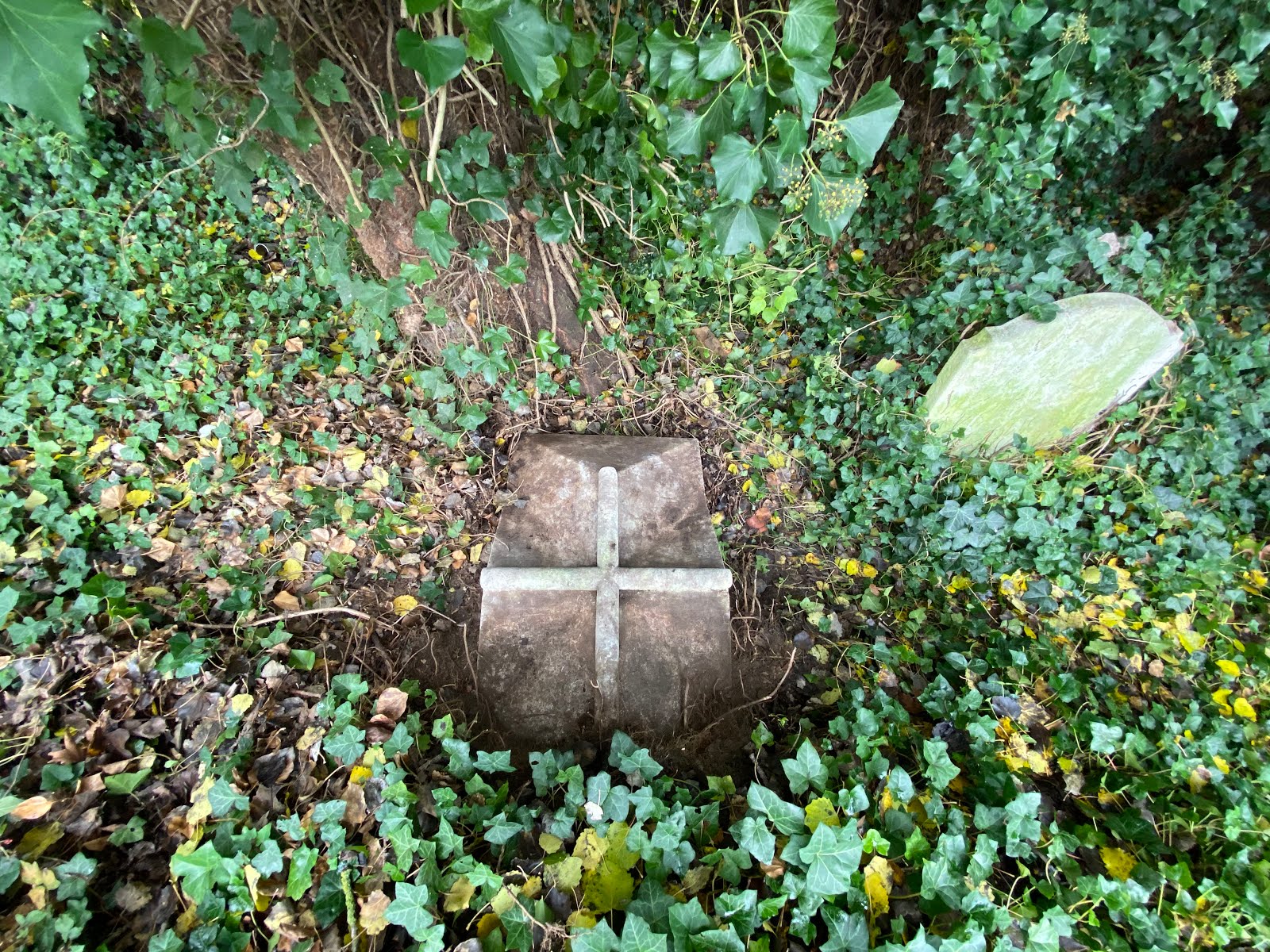