A Northwest Passage Relic in an Old Photograph 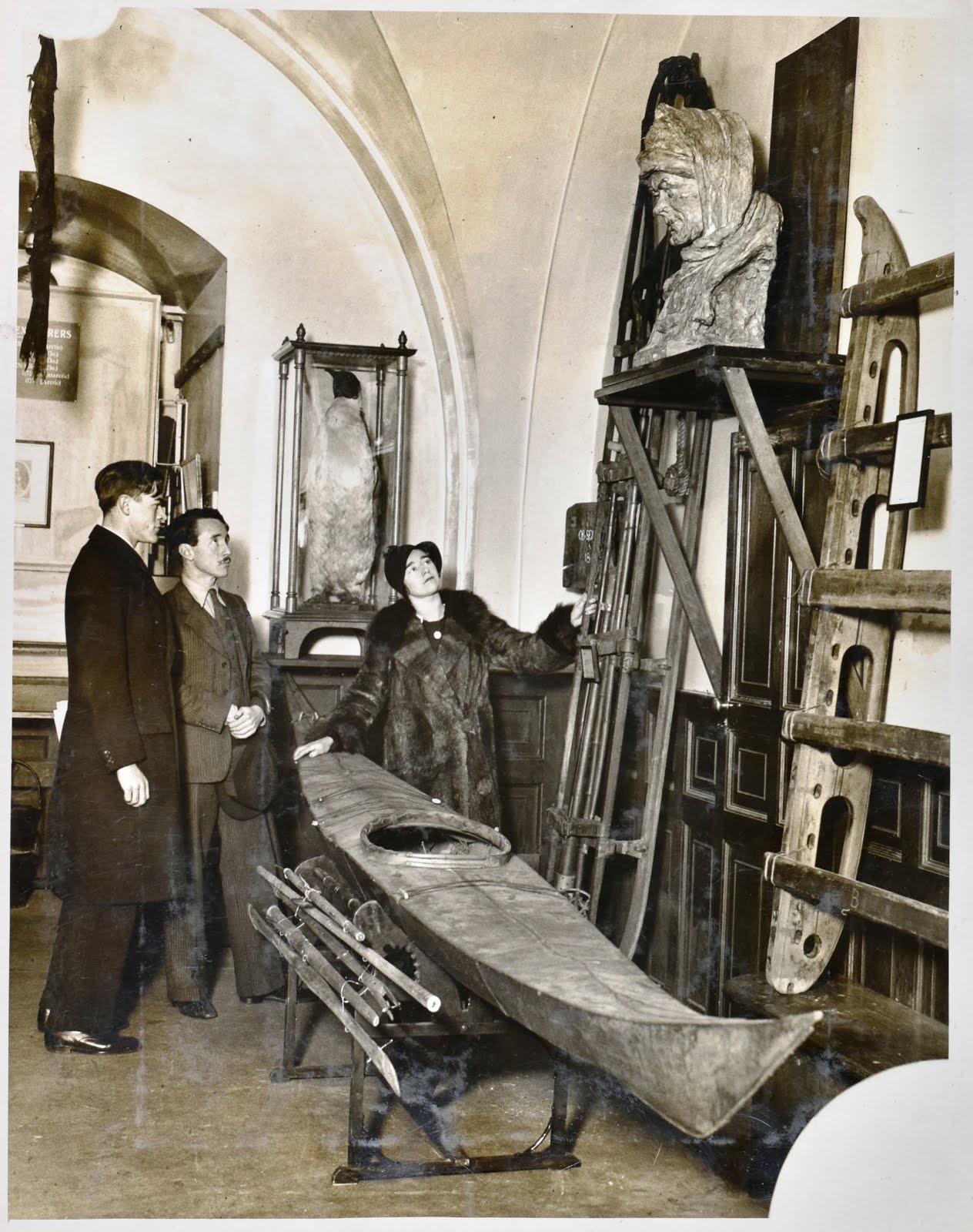 This is an unlabeled historic photo taken inside the crypt of London's lost RUSI Museum.  It was shared by the RUSI Library's twitter account in 2018, their tweet stating that most of the exhibits pictured here are Scott relics.

I believe a rare Northwest Passage relic is hiding in here, one perhaps not seen for a half century or more. 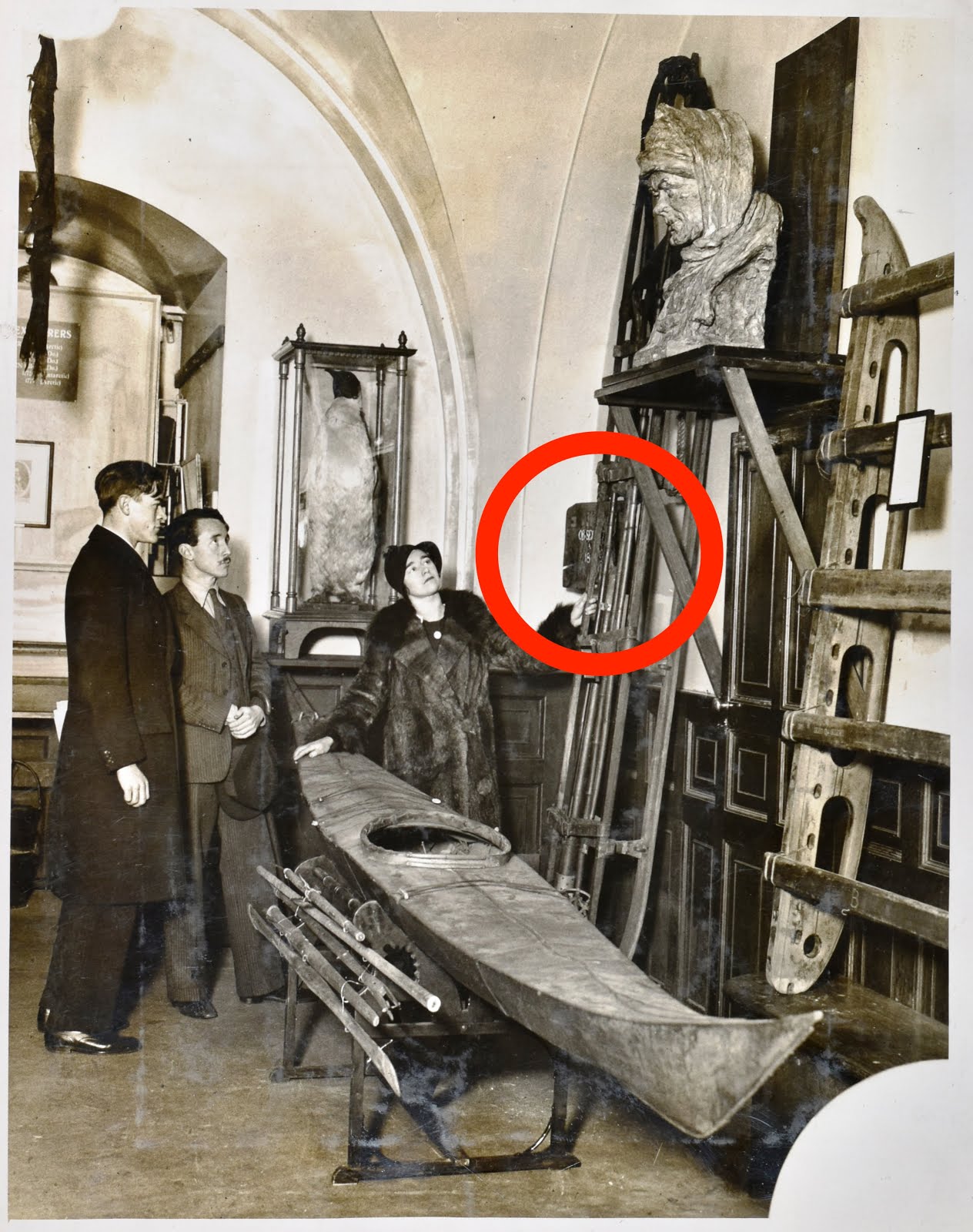 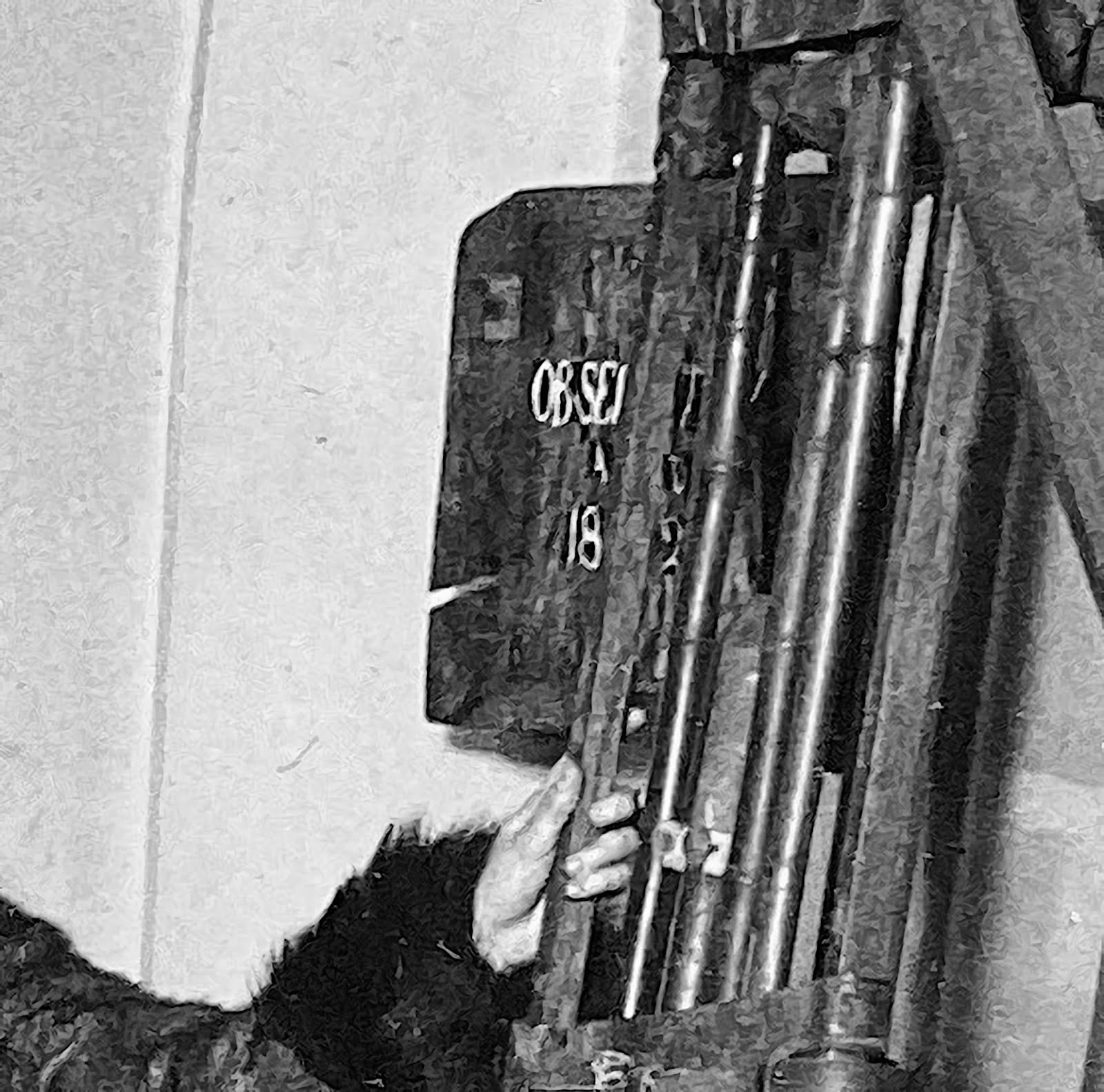 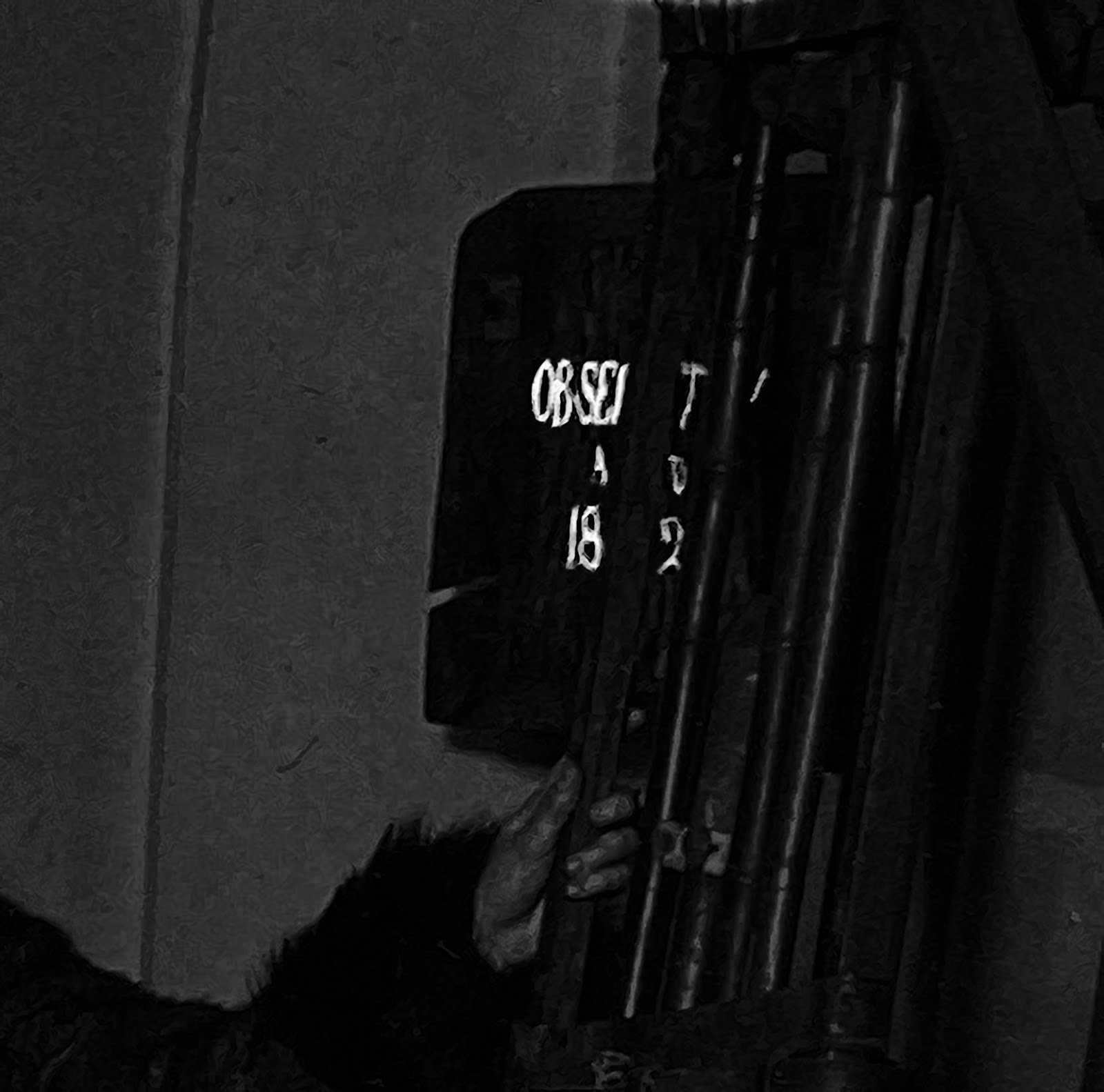 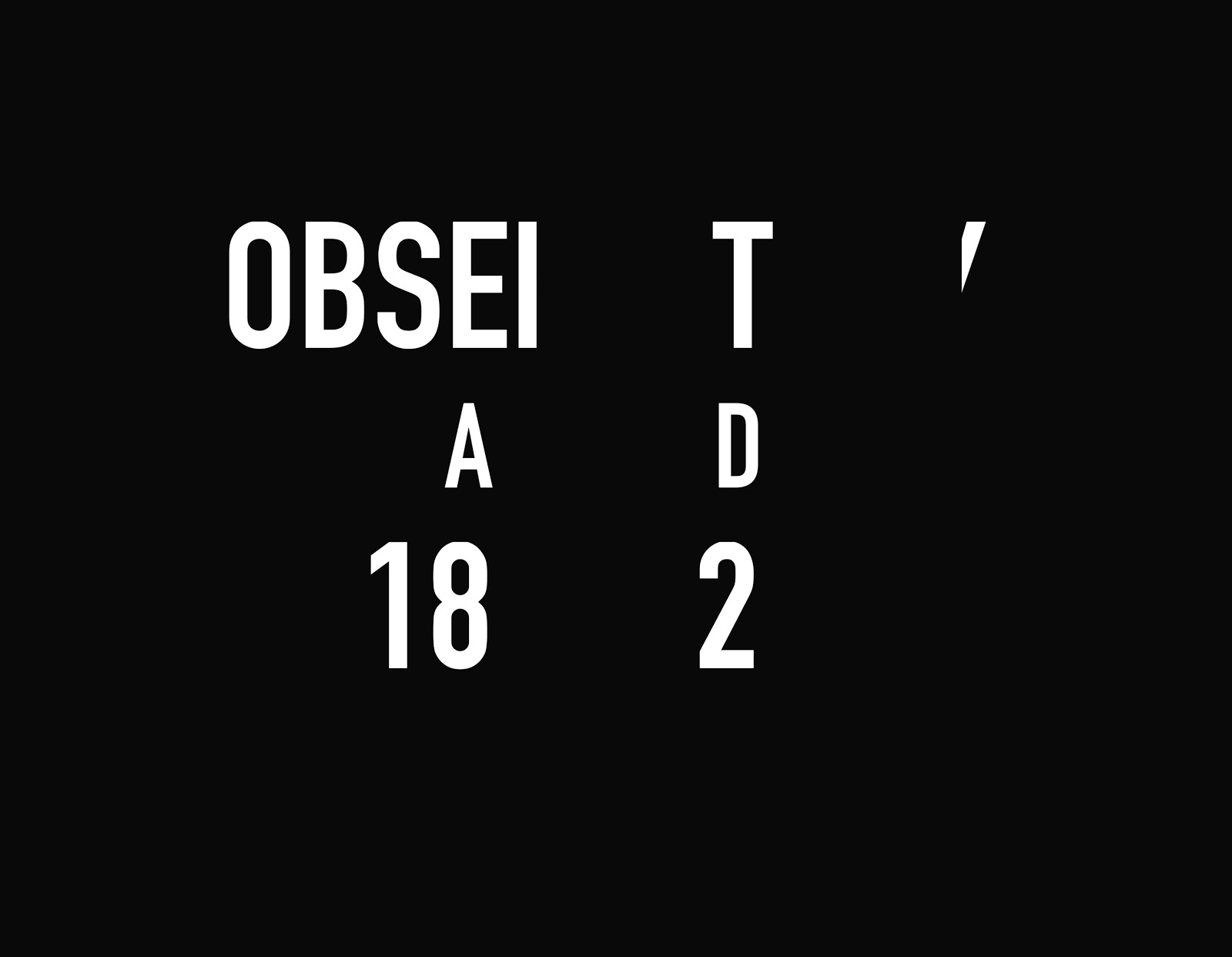 
Being familiar with the Northwest Passage story, this is from an expedition we've all read about.  The principal word above is a common noun we are familiar with from almost every NWP expedition.  The numbers refer to the dates of the expedition.

But this is a rare one.  I knew about this relic only from compiling the RUSI Acquisitions List.  I've never seen it depicted before, neither sketch nor photo; if this relic survived the RUSI dispersal, I'm unaware of it.  This may even be the only existing photograph of it. 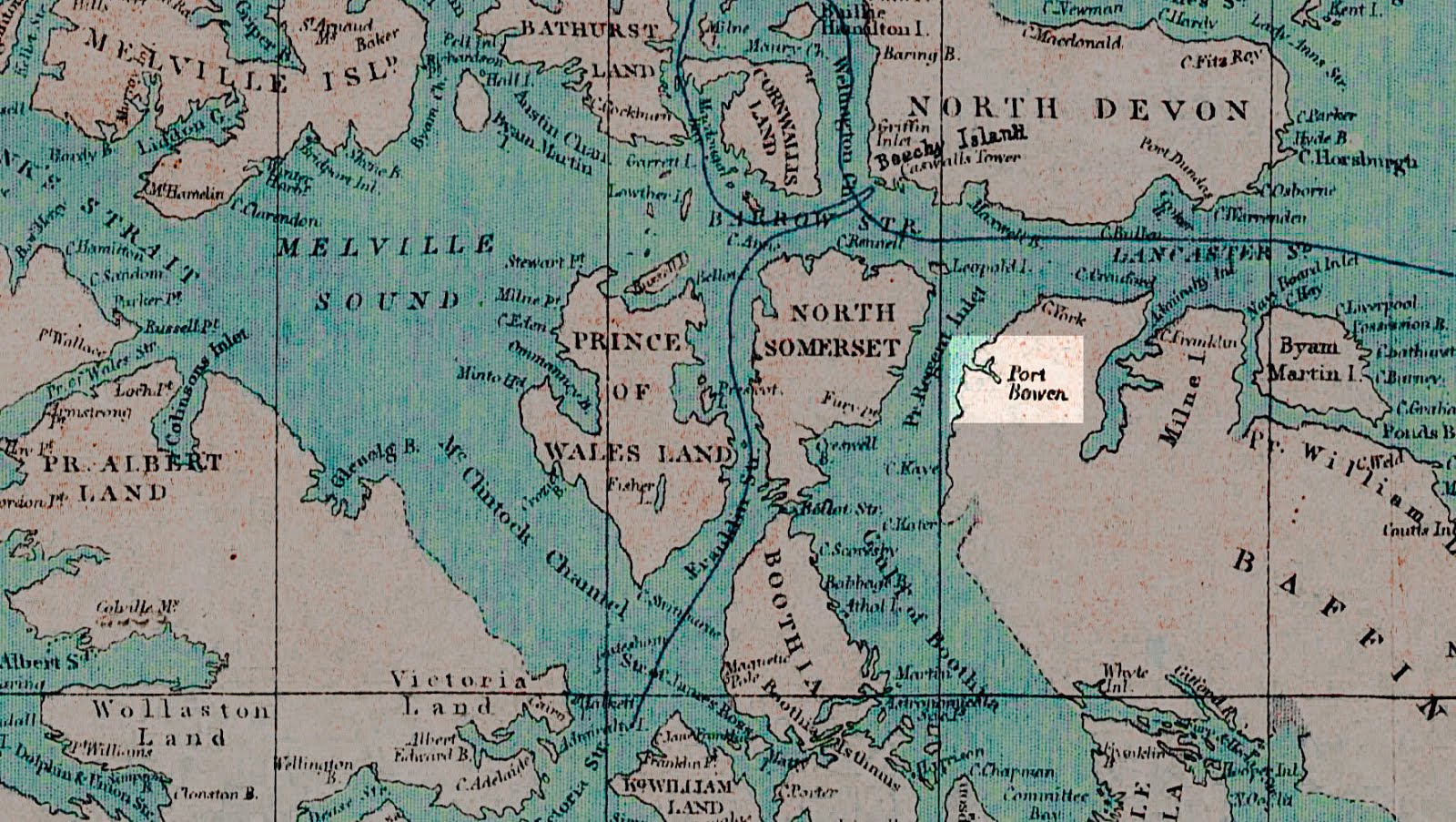 The location in the passage of Port Bowen, Captain Parry's overwintering harbor on his 3rd expedition (1824-5) trying to solve the Northwest Passage.  The following summer he would lose HMS Fury on the other side of Prince Regent's Inlet. 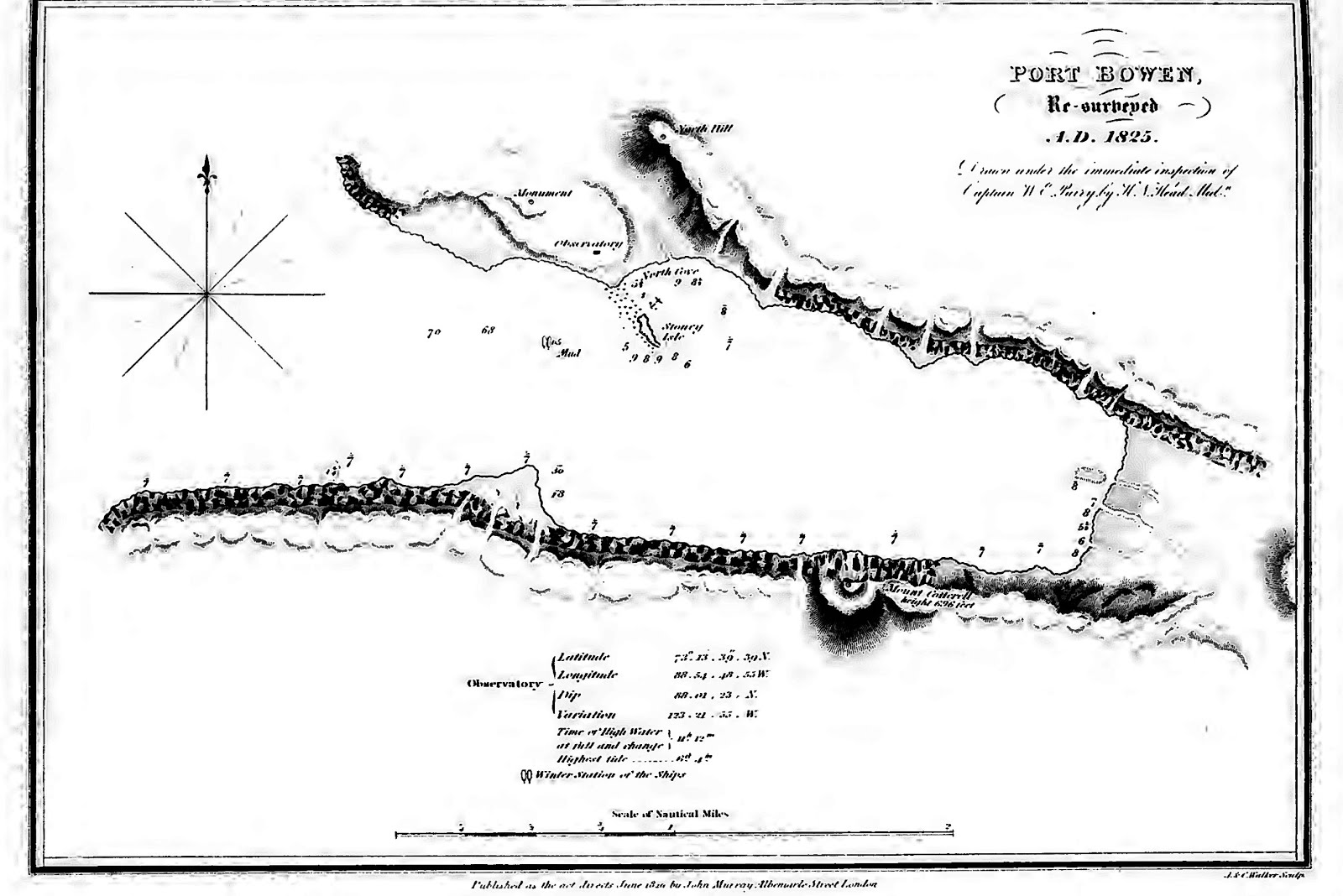 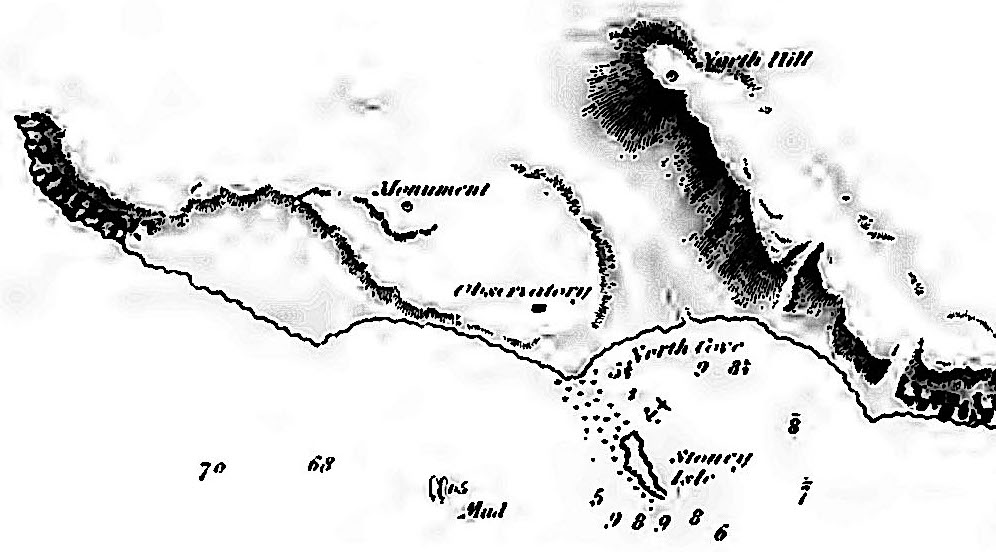 Later in the book, Parry comments that the return of the Arctic sun first hit the observatory (and therefore, this upright relic) on the 15th of February. 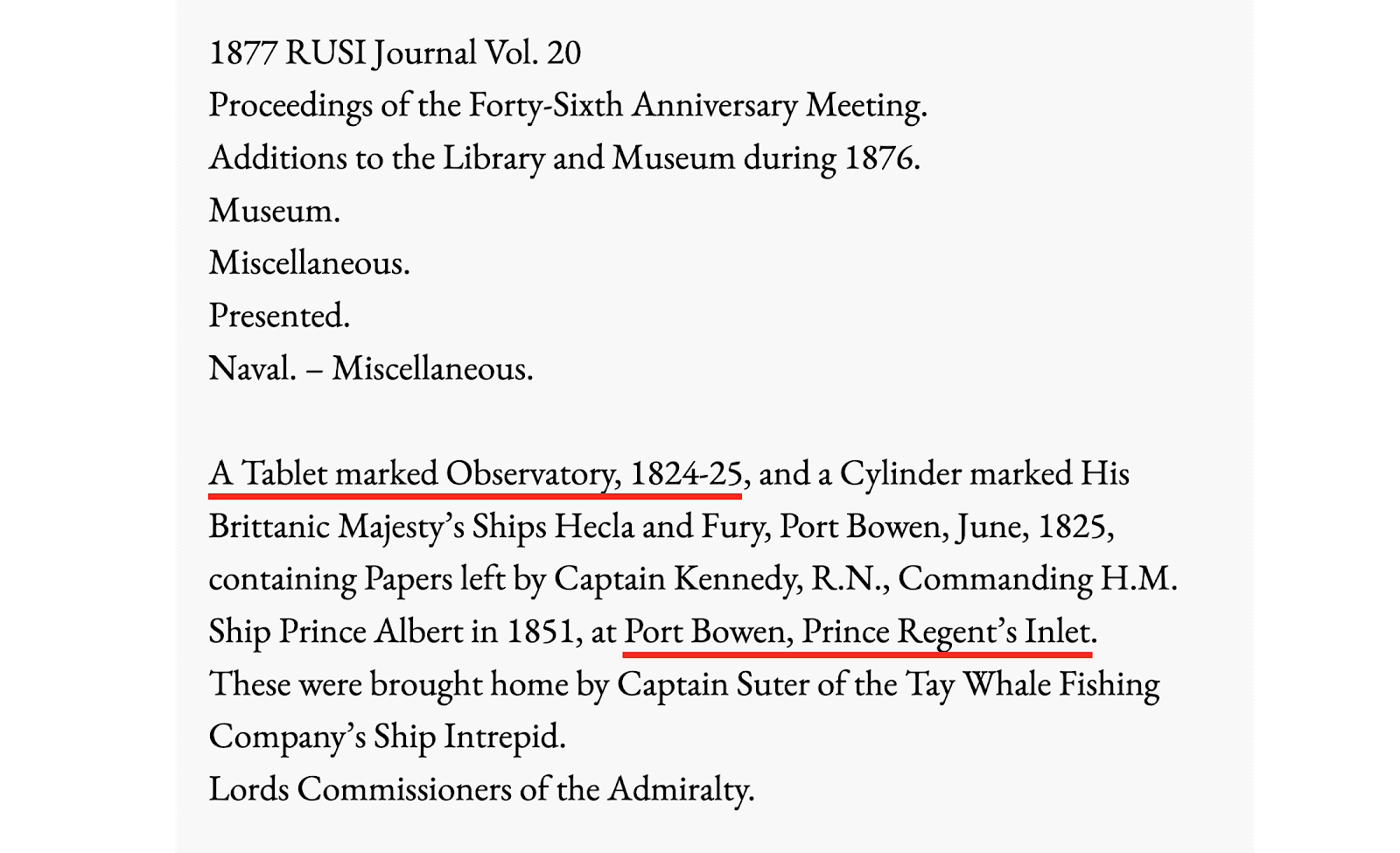 A half a century later, we see this entry in the RUSI Acquisitions List.  During 1876, some newly-recovered relics from Parry's 3rd voyage are entering the museum.

Newspaper account of the 1876 recovery of the relic (November 11th, 1876, St. Andrews Gazette and Fifeshire News):

Other news accounts give an exact date for the relic's recovery: July 5th.  It's interesting that they call it a "finger-post;" I'm assuming that's being used a general term, as no account describes an actual finger on the tablet.  It's also worth noting that this article (and others) indicate those those letters are "cut out" of the brass sign. 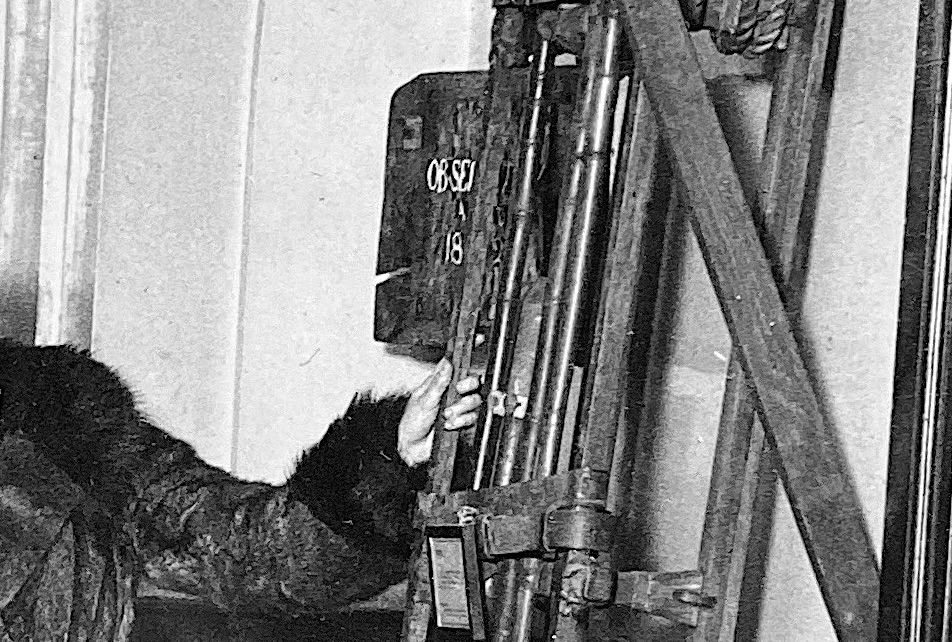 
Captain Kennedy of the 1851 search never mentions seeing this Observatory sign.  Yet the St. Andrews newspaper article (up above) and the RUSI Acquisitions List entry both mention the Observatory sign being found with papers left by Kennedy.  In his expedition book, Kennedy does list some odd Parry relics he saw at Port Bowen – but not this signpost. 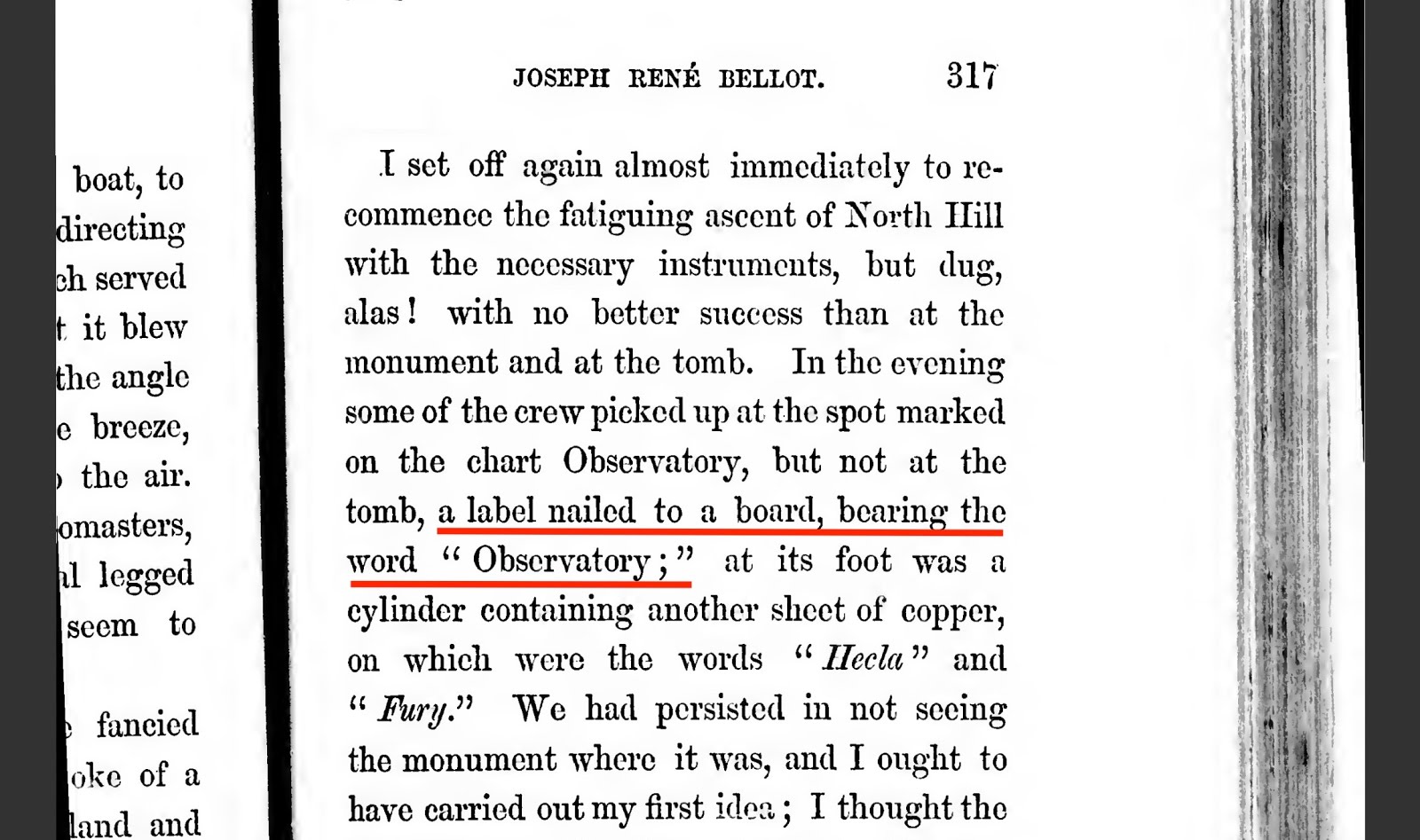 However, Alison Freebairn wrote to me that the Observatory signpost is indeed seen at Port Bowen in 1851 – by the famous French Lieutenant Bellot, who actually noted it in his journal (English translation above).  Alison found reference to this fact in the 2013 paper on Lt. Bellot by William Barr and Nadine & Jean-Claude Forestier-Blazart.

Lt. Bellot describes three relics in 1851: the sign, a cylinder, and a copper sheet.  Later in 1876, at least one newspaper reports exactly these three relics as being recovered.  But the 1877 RUSI Acquisitions List entry (seen earlier above) mentions only two relics:  the sign and the cylinder.

However, here we can see the RUSI dispersal records from the 1960s – and they have all three: sign, cylinder, and sheet ("piece of brass").

[Note here the bizarre year for the Tablet/sign:  1821, despite it saying 1824-25 right in the description.  Both the 1908 & 1913 RUSI Museum catalogues list the sheet and sign as being from a fictional 1821-7 attempt to reach the North Pole by Parry & Lyon.  Consulting the much earlier RUSI Acquisitions List sorts out this later archival confusion.]

Of this troika of Parry relics from Port Bowen, I'm unaware if the sign and the cylinder have survived.  However, the brass/copper sheet with "Hecla and Fury, 1824-5" written on it is held at Greenwich today, with a photo to view:


Brass plate. A flat, rectangular piece of brass with the corners cut. It is inscribed: 'Hecla & Fury 1824-5'. It would appear to relate to Sir William Edward Parry's third voyage in search of the North West Passage, 1824-25. The plate is crudely made and engraved.

[I have strained to see in the photograph where this brass plate says "Hecla & Fury, 1824-5" anywhere on it; I assume it must be on the reverse side.]

Greenwich's description knows this relic came from the RUSI, but no other information has come with it.  There's no mention of the other two Port Bowen relics, the sign and the cylinder.  No mention of Bellot's 1851 sighting of the three relics in situ.  No mention of the July 5th, 1876 recovery by the whaler Captain Soutar of the Intrepid.

You can make out that someone at Greenwich wrote, "RUSI 406" at the top – exactly the corresponding catalogue number from the RUSI dispersal record above.  We might assume that someone at Greenwich saw RUSI's catalogue note about a fictional 6 year attempt on the North Pole, and corrected it to a more sober, "It would appear to relate to Sir William Edward Parry's third voyage."

As with the George Back's Tripe de Roche, the RUSI Acquisitions List provides a critical extension cord for the Christmas lights in connecting a brief remark in Bellot's 1851 journal to an 1876 newspaper notice, through to a relic sitting in Greenwich's collection today.  I want to thank here again Jacqui Grainger the RUSI Librarian for pointing me toward this invaluable source for tracing Franklin/NWP relics.

I came across this notice in the RUSI Journals.  It is for a 1933 polar exhibition at the RUSI Museum.  This exhibition may have been the reason for the old photograph.  In addition to the polar-centric relics in the photo, the notice says it will be "for the Christmas holidays," and indeed the woman in the photo is wearing a winter coat.  If these turn out to be related, we could estimate the photo's date as around late 1933. 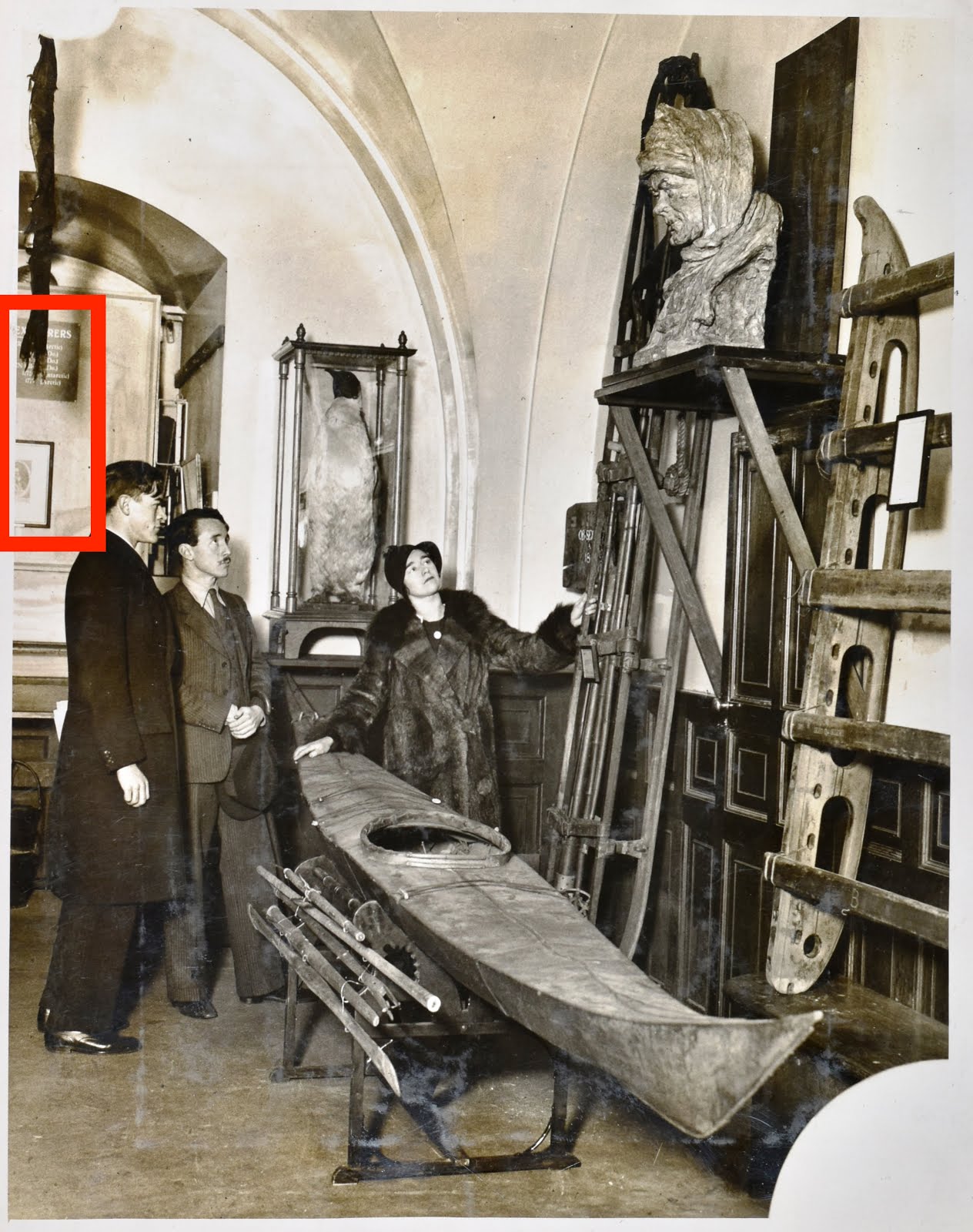 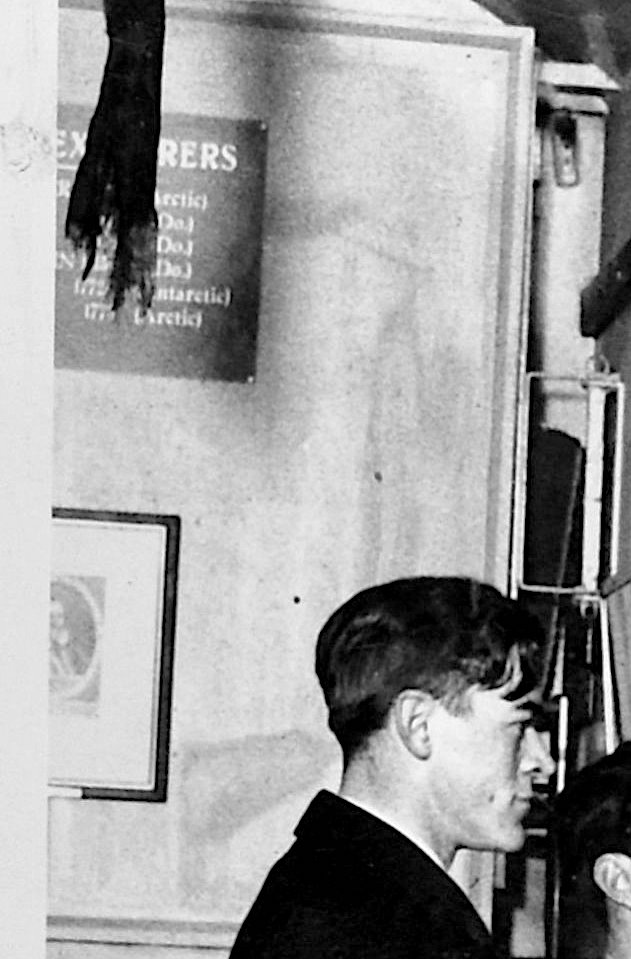 It should be possible for someone to suss out who is in that half-visible sketch, and the list of Explorers above it.  Arctic, three Dittoes, then Antarctic, then another Arctic.  It looks like 1700s dates.  1775 at the end maybe, and just above it is 1773/?.

The picture below the list I think resembles this sketch of Frobisher.  His might be the list's top name, ending with a visible letter "R", right below the "EX" of the title Explorers.  These 1700 exploration years are outside my domain. 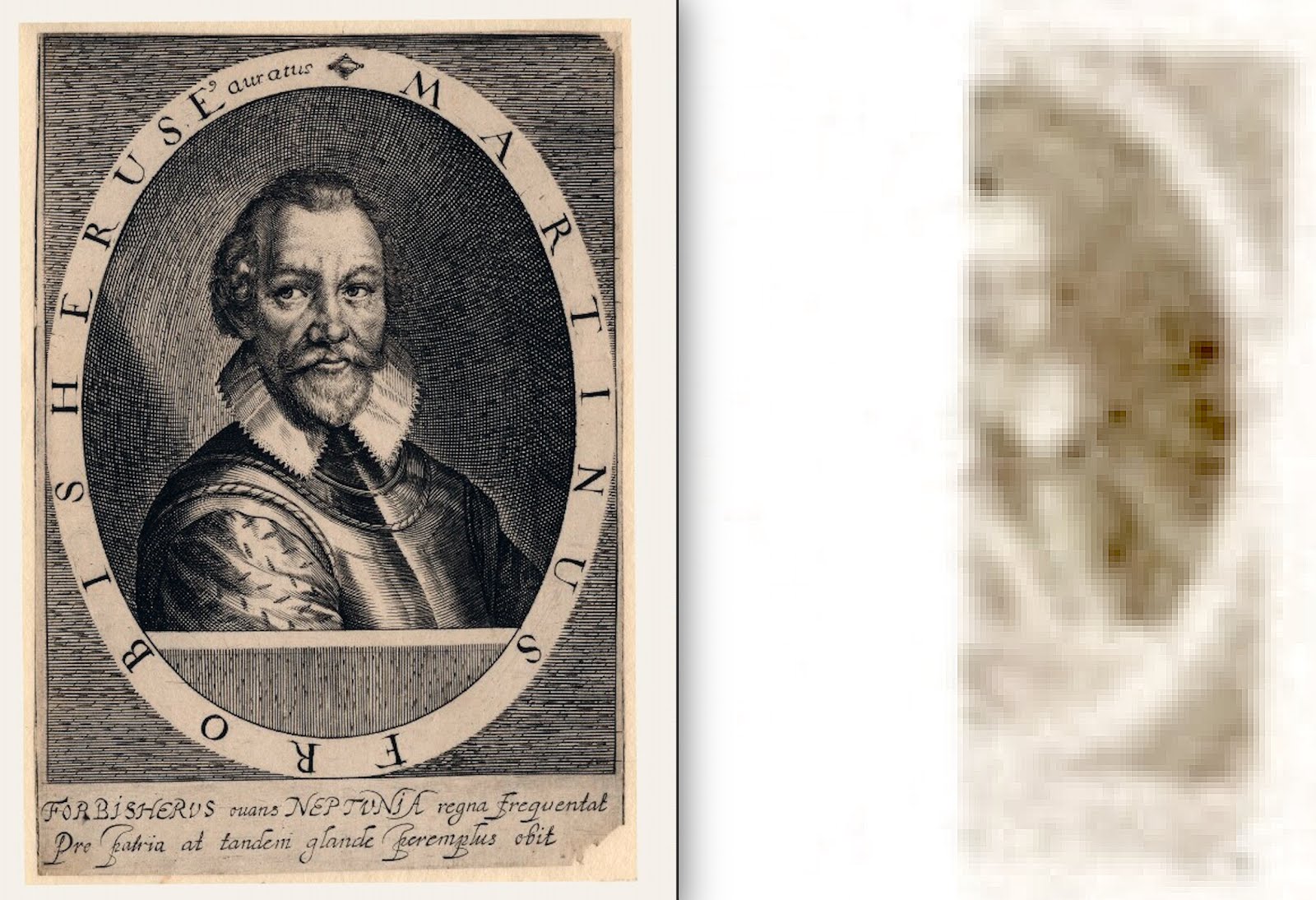 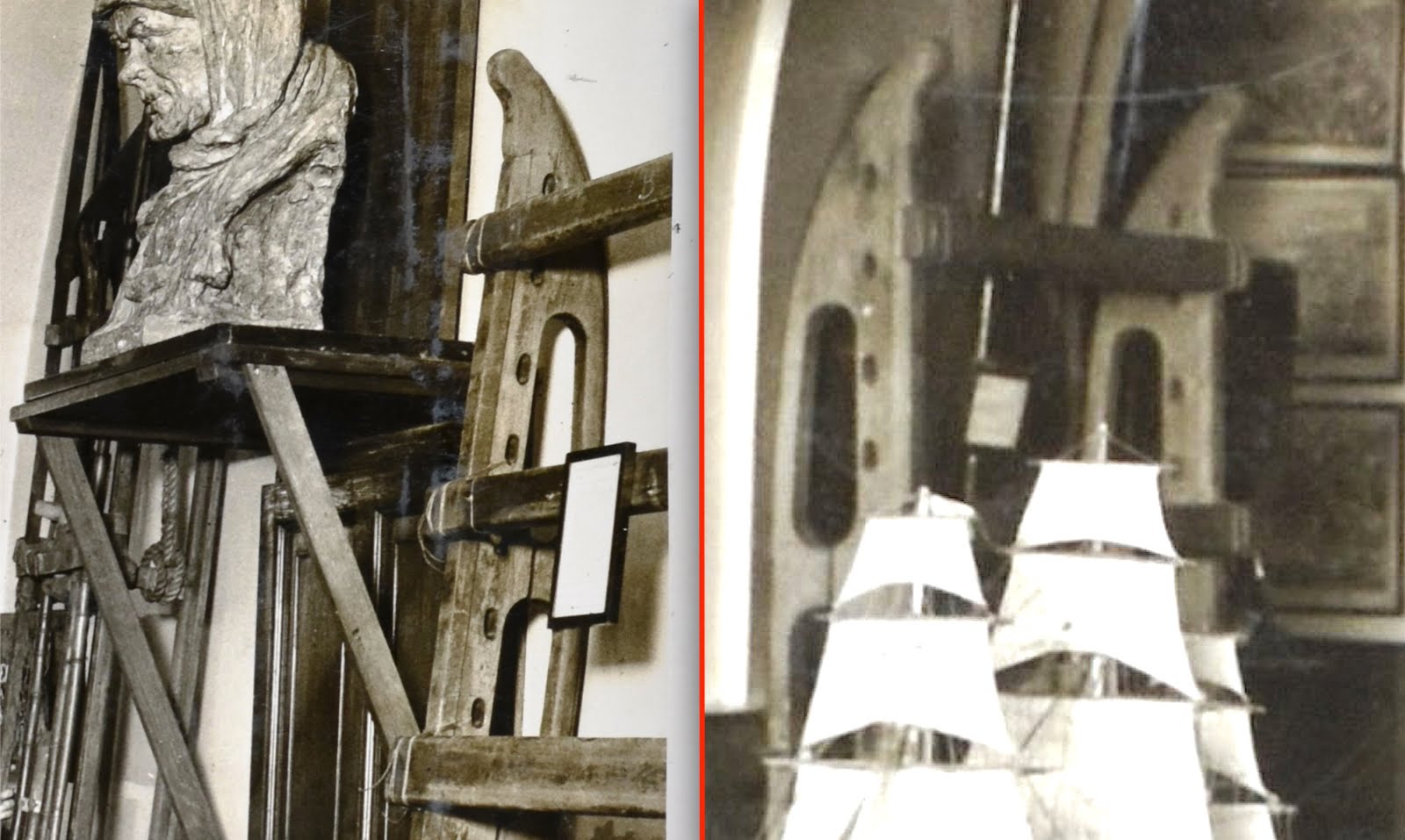