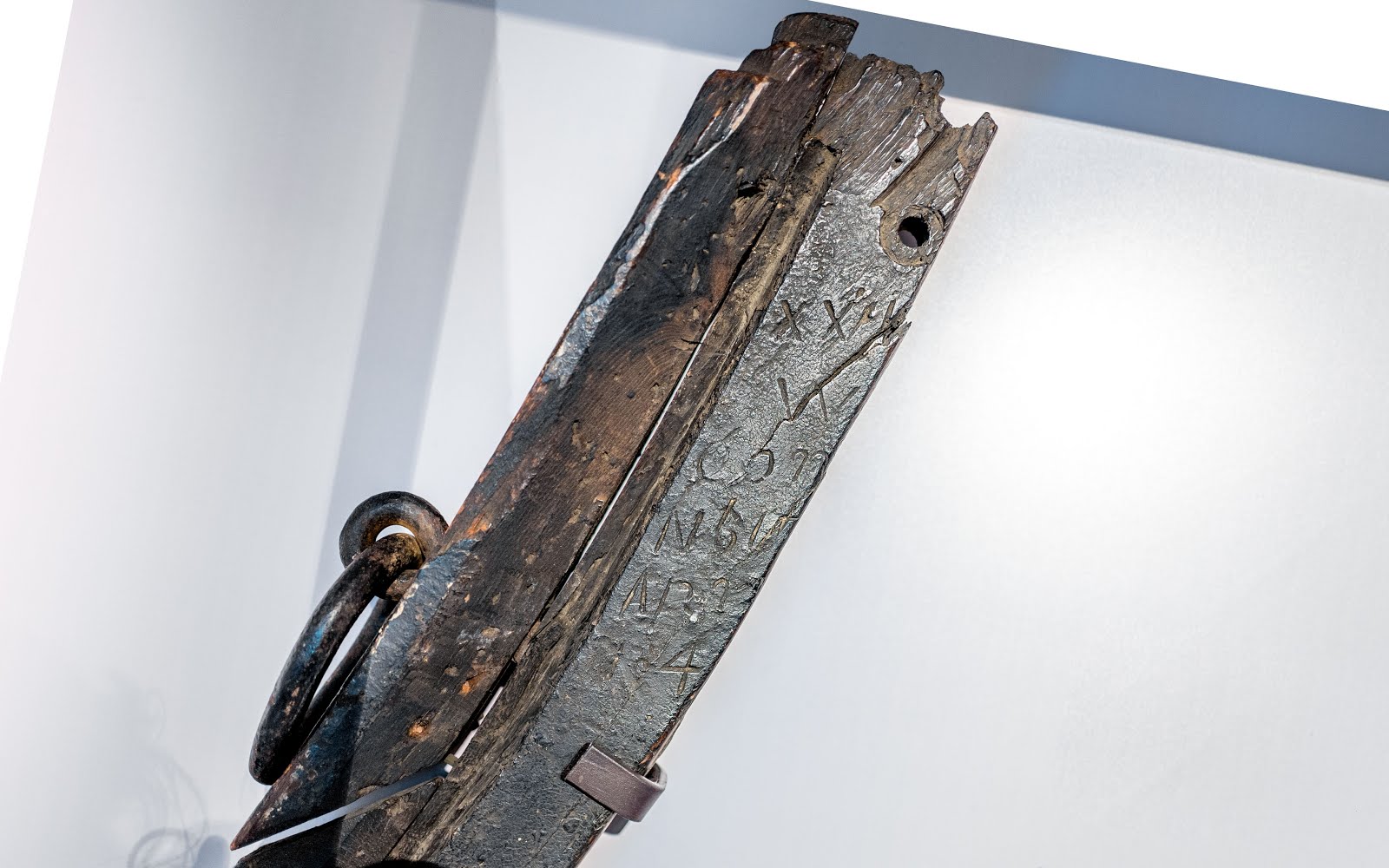 There's a story in Walpole's book of relics, that Dave Woodman thought he had proof of a 2nd boat on his hands when a Greenwich curator – looking at the museum's studio photo of this same relic – told him there were no markings visible on this boat stem.

Lt. Hobson: “There were some markings on her stem, but I could not decipher them.”
Capt. McClintock: “The only markings were those upon her stem, by which we learned that…” 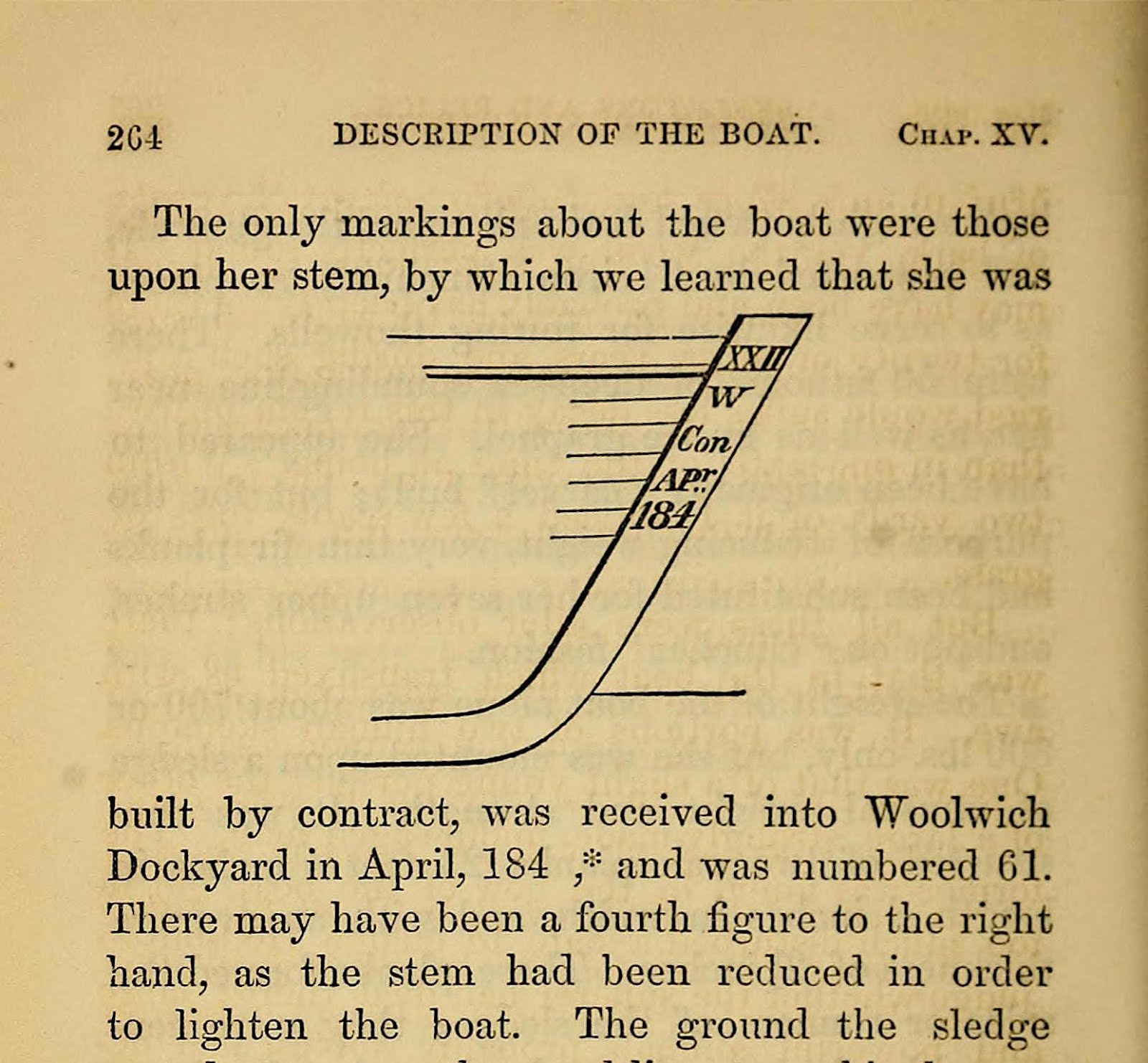 “...that she was built by contract, was received into Woolwich Dockyard in April, 184–, (Footnote: Only the first three figures of the date upon her stem remained, thus – 184 .) and was numbered 61. There may have been a fourth figure to the right hand, as the stem had been reduced in order to lighten the boat.”

- McClintock, The Voyage of the Fox in the Arctic Seas 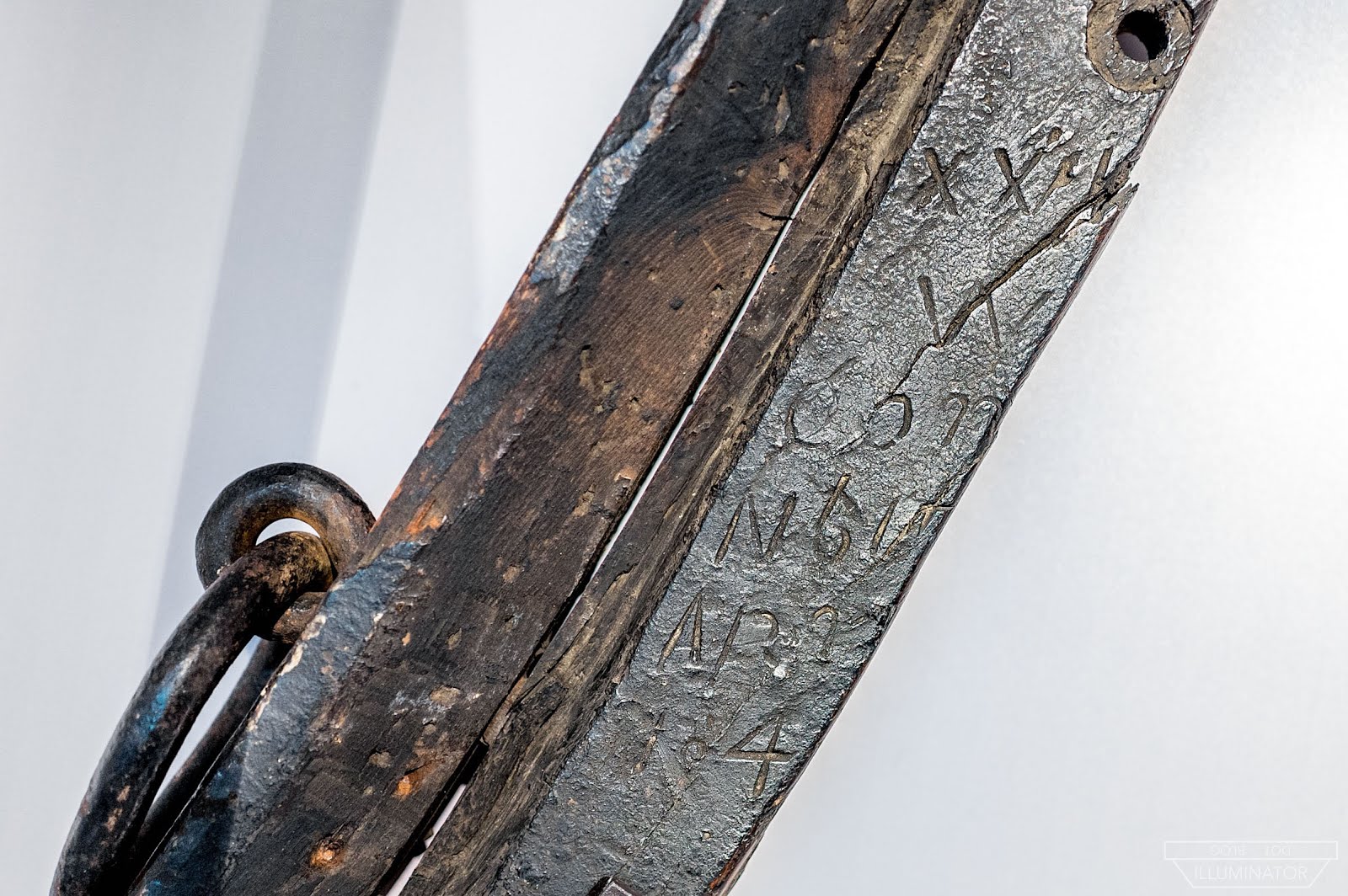 This was a lucky shot from Death In The Ice.  I was moving my camera lower and to the right, and reached an angle where the ceiling lights at Mystic Seaport lit up the paint on the written portion of the stem.  Leica Q, f1.7, ¼ second exposure, 100 ISO, no flash.  The reflection was fairly faint, but enough that I could crank it up in Lightroom, separating that paint visually from the wood.

For a comparison, try picking out the carved writing on Greenwich's studio photo.  Their photo is more accurate for what this relic looks like in person, but is effectively unreadable. 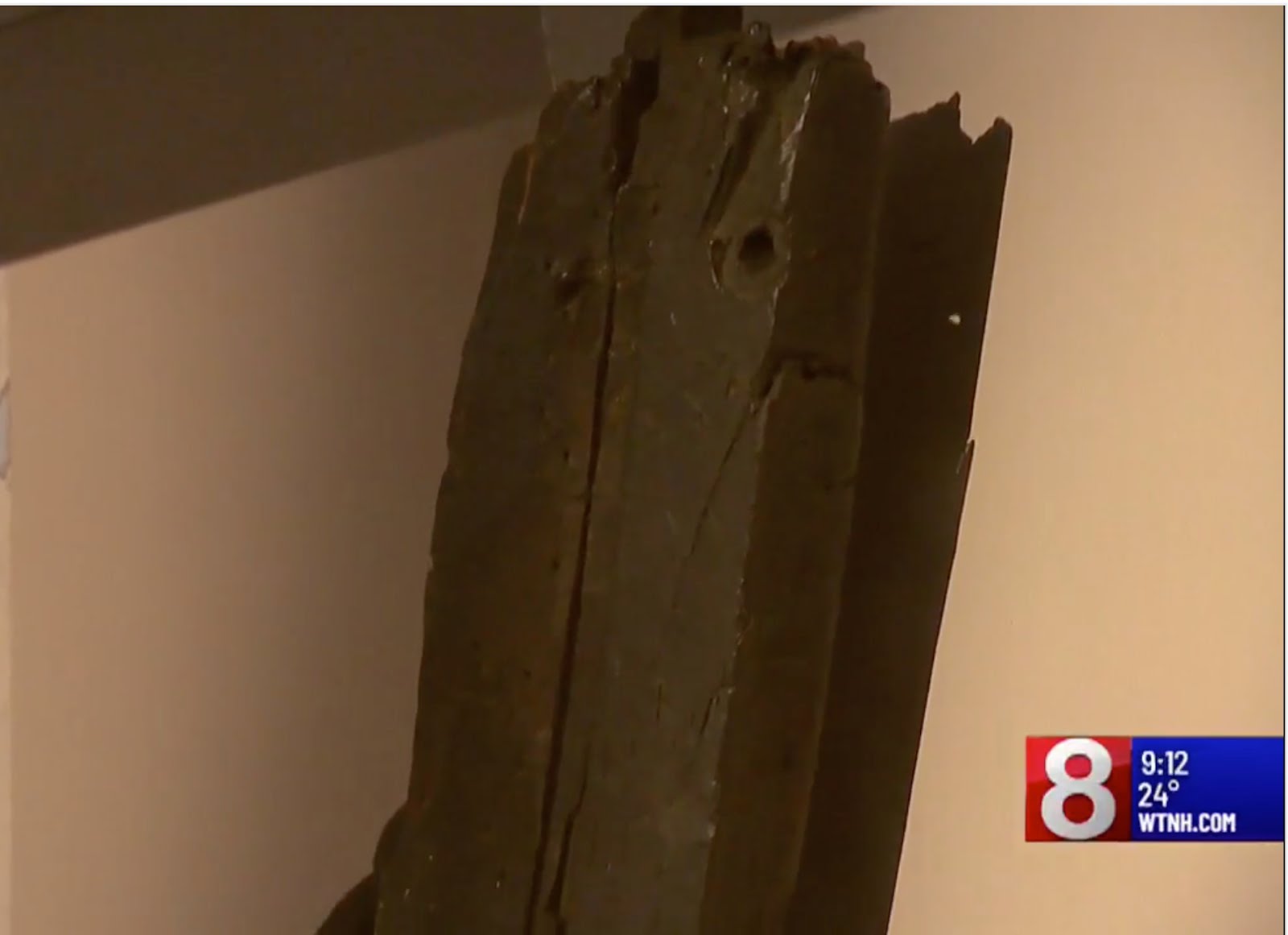 Or another comparison:  This is what the stem looked like on the local 9 o'clock news.  And note the deep shadow:  this is the image they got even with a camera crew's spotlight pointed at it.  Like Greenwich's shot, this image is more accurate of what you see in person, but not readable.
[The unlikeliest of TV stars.  Of all the curious relics in Death In The Ice to spotlight, my hat's off to WTNH-New Haven for giving the Erebus Bay Boat Stem its first primetime solo appearance.] 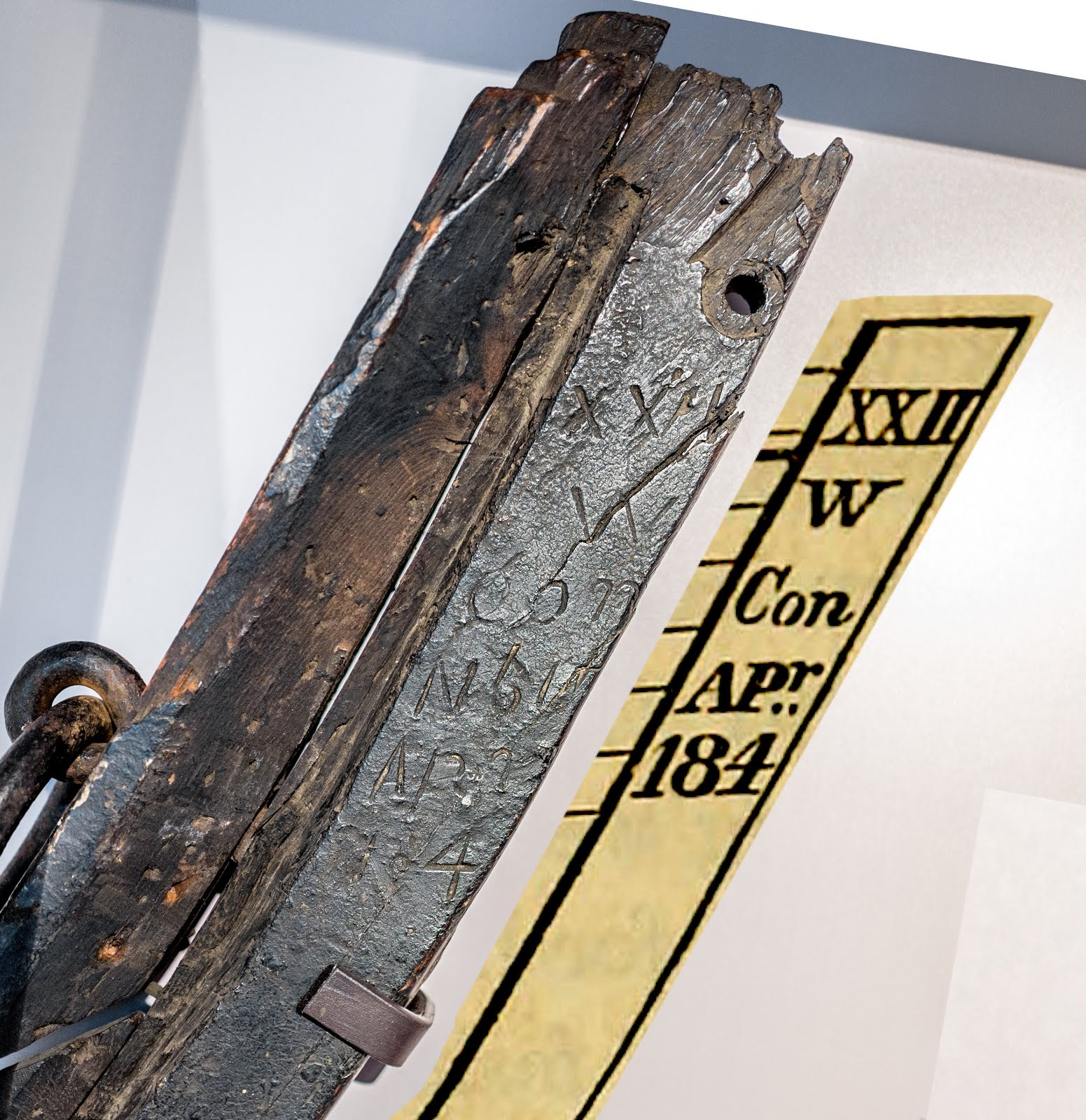 A comparison to the sketch found in McClintock's book.  The "N61" line is missing from his book's sketch, although is mentioned in his text.